Companies can gain a competitive advantage by designing workplaces that make wellbeing a default choice, argue the authors of The Healthy Workplace Nudge book in a talk Dezeen hosted with Haworth in Chicago.

Architects and interior designers should be creating workplaces that nudge people into having healthy behaviour, says Dr Michael O'Neill, an expert on the relationship between office design and worker performance who leads Haworth's Global Workplace Research department.

O'Neill was joined at the talk by his co-writer Rex Miller, a futurist, author and consultant. In a conversation moderated by Dezeen's US editor Dan Howarth, the pair explained the findings of the research presented in their book The Healthy Workplace Nudge.

The book builds on the previous work of behavioural economist Richard Taylor, who states that policies and programmes could be designed to nudge people towards decisions that benefit themselves.

"The idea of the nudge is very simple," O'Neill explained. "A nudge simply makes it easy for you to make the choice that's in your best interests. It's about making the right choice easy to make."

Miller argued that workplace design should remove barriers to healthy decisions, while making unhealthy decisions more difficult. "80 per cent of the time we're on a path of least resistance – default mode," he said. "So make the healthy choice the default choice."

The pair offered examples of potential design nudges that could be employed, including placing water coolers further away from peoples' desks to encourage more physical activity, reducing the size of plates in office kitchens to promote portion control, and creating digital-free zones where employees can take a break from their screens. 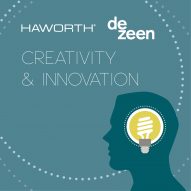 O'Neill argues that rather than focus on workplace wellness programmes, companies should build spaces that minimise stress and prevent health problems from arising in the first place.

"There's a really big difference between wellness and wellbeing," he says. "Wellness programmes are really attempting to fix existing heath problems – things are already broken by the time that they're trying to do something about it."

"We realised that we need to reframe the the problem and think about it in terms of wellbeing instead," he continued. "The idea of wellbeing is to try to change people's behaviours that are leading to these problems with their health, to get to them before they're sick."

The pair believe that companies that employ the recommendations of their research will gain an advantage in the marketplace against their competitors.

"When companies start building spaces using these criteria, they're going to be able to use that to attract and retain staff," explains O'Neill. "People really care about their wellbeing, especially younger generations."

The talk was held in collaboration with office furniture manufacturers Haworth at this year's NeoCon furniture fair, which took place 11-13 June 2018 at the Merchandise Mart in Chicago.