The Architectural Association has sought to alleviate concerns that staff cuts will mean the loss of its exhibitions and publications departments, as members including David Adjaye and Richard Rogers demand a meeting to reverse the plans.

Adjaye and Rogers, along with Kate MacIntosh, Ted Cullinan and Edward Jones, were among 21 signatories of a letter to the school's council on 6 December 2017, which requested a general meeting of registered members.

In an email seen by Dezeen, the members laid out that the meeting would be to insist the council "reverse the announcements recently made about redundancies in the publications, exhibitions and other departments" and to "retract the consultation/redundancy procedures already in train".

The entire staff of both departments are among the 16 roles that have been put at risk of redundancy.

The undersigned instructed the Architectural Association's (AA) council to "consider other means of meeting the objectives sought" and to put together a new plan within 28 days of the proposed meeting.

Interim director at the AA Samantha Hardingham released a statement today re-asserting that the world-leading architecture school does not plan to close its exhibitions and publications departments.

The proposed staff cuts come as the AA seeks to pass a financial audit as part of the process of obtaining Degree Awarding Powers (DAP), under a recently reformed council.

"It's our responsibility, as what is a very large charity and a business, to be very much in control of its finances," Hardingham told Dezeen,

"The environment for us is changing. Expenditure, again for many people is going up, whereas income is not necessarily going up at the same rate, so we have to balance those things," she added.

"We also have to balance the fact that generally the higher education sector is having a particularly difficult time right now for a number of different factors."

Currently the higher education institution does not award its own degrees. Postgraduate degrees are ratified via the Open University, with undergraduate degrees accredited by the Royal Association of British Architects.

The power to bestow degrees would empower the AA to assist its overseas students with UK Border Agency requirements. Safeguarding overseas student's visas is of paramount importance to the school under a Conservative government that is seeking increasingly tighter immigration controls alongside ongoing Brexit negotiations.

"Students are our primary source of income for the school," Hardingham said. If students lost their visa rights, the school would lose its major revenue stream.

"We have been very, very fortunate for many many years – a 170 year history – to be able to support activities that haven't had to make a profit," Hardingham said of the exhibitions and publications programmes.

"But it most cases they've run it at a loss. There's nothing wrong with that necessarily at all, it's just we're not in a position right now to really sustain those kinds of expenditures at this particular moment in time."

In choosing between between safeguarding the school's students and restructuring its non-academic areas, the interim director has faced backlash from AA members and the wider architecture community. 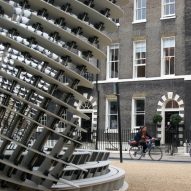 Critics accused the AA of "destroying it's own cultural mission" and enacting "mindless cultural vandalism", as they voiced fears that redundancies would irreversibly damage the exhibitions and publications output of the AA.

World-renowned architects including Rem Koolhaas and Toyo Ito signed an open letter to the AA calling on it to drop the redundancy plans.

Hardigham took the interim role on after Brett Steele, who had held the directorship for 11 years, left to take up the role as head of arts at the University of California. She is the first female director in the school's history.

Closing her statement today, Hardingham thanked everyone who had voiced their concerns and promised that the AA would continue.

"I sincerely hope that the intense interest that is currently being shown will be translated into tangible support and generosity for our students and the School that we all love so dearly," she said.