London designer Paul Cocksedge has unveiled plans to build a structure in one of the world's largest botanic gardens in Oman, which is based on the sun's path across the sky.

It will offer shade to visitors to the soon-to-open Oman Botanic Garden, a 420-hectare garden that is set to become the largest of its kind in the Arabian Peninsula.

The asymmetric structure will take a distorted figure-of-eight shape designed to precisely mimic the sun's changing position in the sky over the course of a year. This form was created using planetary data, collected from the garden.

"It made sense to use the sun, and our perception of its 'movements' as the basis for our design. Once we started to study the lines of the earth's rotation around the sun, and explore the science of the planets, we were hooked. There's so much data, and so many shapes and lines that we could never have imagined ourselves," explained Cocksedge.

"We based the shade on the sun's shifting position in the sky, which we plotted using an analemma – a diagram that shows the sun as if photographed from the garden at the same time every day for a year," he continued. "Every analemma is unique to its location, meaning the canopy's form is specific to its surroundings."

Cocksedge is an industrial designer but has worked on several large-scale projects, including a staircase that incorporates a garden and a courtyard lighting installation resembling pieces of paper caught in the breeze.

However, this will be one of his largest installations to date. It is one of several architectural structures that will be built in the Oman Botanic Garden, along with a visitor centre, and education and research facilities.

Designed by architecture firm Grimshaw, the Oman Botanic Garden will be located 35 kilometres outside capital city Muscat in the foothills of the Al Hajar Mountains.

It is not the only major new project in the area – British firm Allies and Morrison recently unveiled plans to create a new city, in a desert valley between Muscat and neighbouring city Seeb. 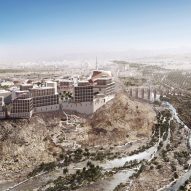