Dezeen promotion: the Mayan-inspired tiles that clad one of Frank Lloyd Wright's celebrated Textile Houses have been recreated by Offecct as acoustic wall panels.

The design is based on the decorative tiles that the American modernist architect used on the walls of the Ennis House in Los Angeles. Built in 1924, it was the largest of the four Textile Block Houses, which are all early examples of Mayan Revival architecture.

The house's geometrically patterned reliefs were cast in concrete to use for Wright's building. But Offecct's version is made from recyclable moulded polyester and is designed to be used on interior surfaces.

"The Ennis block pattern is not only beautiful, its geometry also inhabits the potential to absorb sound," said Offecct.

"By keeping Wright's design intact but transferring it from concrete which lacks acoustic properties to our felt material, it becomes a high performing acoustic panel."

Ennis is the latest addition to Offecct's Soundwave collection, a range of 16 acoustic panels designed to reduce background noise and echoes in a room.

All 16 were created by different designers. The first panel was designed by Helsinki-based designer Teppo Asikainen in 1999, while other contributors include Catalan designer Mario Ruiz and Danish architecture firm 3XN.

The launch of Ennis coincides with the 150th anniversary of Frank Lloyd Wright's birth – an event that was accompanied a huge programme of events, from exhibitions to open houses.

"Offecct is a company with a strong interest in the history of architecture and we have always admired and been inspired by Frank Lloyd Wright’s work," said Kurt Tingdal, CEO of Offecct.

"This new collaboration and product is truly a highlight of Offecct’s development." 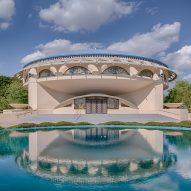