Seoul-based design studio SWNA has created a clock that incorporates an emergency kit filled with tools, which can be used in the event of a natural disaster.

SWNA was approached by Korea Gyeonggido Company to design a "disaster-related" product for the public, following a spate of natural catastrophes in the country.

In order to encourage people to keep emergency equipment in their homes, the team wanted to create something that was "inconspicuous", and that would fit in among regular home furnishings.

This resulted in the Life Clock, which appears as a normal time-telling device, but contains an emergency kit.

"Korea is a country not accustomed to disasters," studio founder Sukwoo Lee told Dezeen. "Although several years ago a number of disasters, like Sewol disaster, Gyeongju earthquake, and Pohang earthquake have raised interest – most Koreans did not have disaster goods."

The clock, available in red, blue and grey, is designed to open on its side. It holds a torch, an aluminium heat blanket, a pressure pack, a whistle, a card that details personal medical information, and a guidebook for coping in disaster situations.

Each of the items was selected based on interviews that the team carried out with individuals from emergency crews, fire departments, disaster and medical experts.

"When I had to replace the battery on my watch at home, I noticed there was a lot of extra space," said the designer. "That idea suddenly crossed my mind while working on the project, so the idea was developed."

"Usually, it is used as a general clock. The object itself is intended to be inconspicuous in lif – however, in case of emergency, it can be easily opened."

Architects and designers are increasingly focusing on problems facing those in disaster-stricken and developing countries.

Automotive engineer Gordon Murray created the OX truck, which aims to provide remote parts of Africa and the developing world with transport and aid for both everyday living and emergencies, while Land Rover unveiled a drone-equipped Discovery car designed for search and rescue operations earlier this year. 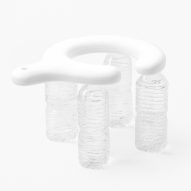