Land Rover has developed a Discovery vehicle for the Red Cross, equipping it with a drone that would remotely scan landscapes after earthquakes or avalanches.

The car is the result of Project Hero, which saw Land Rover's Special Vehicle Operations team working alongside the Austrian Red Cross to create a vehicle suited to search and rescue operations.

Together, the two teams developed an updated version of a Land Rover Discovery SUV, which features a roof-mounted drone and a landing system that enables the drone to land on the vehicle while it's moving.

When airborne, the drone can transmit live footage to the Red Cross' emergency response teams, helping them respond more quickly and effectively to landslides, earthquakes, floods and avalanches, where maps often become redundant.

"We hope to help the Red Cross save lives in emergency situations," he said.

Project Hero, which was revealed during this year's Geneva Motor Show, will be based at the Austrian Red Cross training centre in Erzberg and in the mountainous area of Eisenerz in Vienna for 12 months from June 2017.

Here, the drones will be tested and used in simulated rescue operations to optimise the technology and make it suitable for complex real-life natural disaster scenarios.

In addition to the drone technology, the car will feature a sliding floor in the rear load space that can be deployed as additional, specially positioned LED lighting to aid night vision. It also has power supply points that accept multiple plugs from different regions. 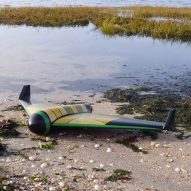 This year's Geneva Motor Show takes place from 9 to 19 March. Other news from the event includes Volkswagen's friendly new shape for cars of the future and Airbus' concept for a flying car.