Peter Barber Architects has completed a terrace of mews houses in north London, which are arranged along a cobbled lane and feature oriel windows that cantilever out from their reclaimed-brick facades.

The owner of the site, a local developer called Roberto Caravona, asked Barber's studio to help him gain planning permission to replace a block of derelict workshops and a patch of scrubland with a row of homes located close to Finsbury Park.

Caravona had seen a previous application drawn up by a different architect rejected because of overlooking issues with the neighbouring houses, so knew what sort of issues the new proposal had to overcome.

The studio developed a strategy for achieving the same number of units on the site as the previous application by continuing the existing mews with a row of two-storey houses.

By replacing the derelict two-storey workshop building with a terrace of courtyard houses that alternate between two and one-and-a-half storeys, the outlook from the neighbouring Victorian houses is actually improved.

"We were able to introduce some of the mechanisms we've developed and evolved over the last few decades, including the notched terrace typology with courtyards that help to reduce the overall massing," project architect Phil Hamilton told Dezeen.

"By consulting with the neighbours and taking on board their previous concerns, we managed to develop a solution that was acceptable to them and made the application process much smoother."

At the eastern end of the site, which was previously occupied by weeds and bushes, the studio sank the final three houses into the ground by around one metre to reduce the perceived scale of the buildings.

Slanted roofs also help to minimise the floor-to-ceiling height of these properties when viewed from the rear, while creating a more generous internal volume to the front.

"We felt it was important to maintain the integrity of the elevation as you walk up the public mews," Hamilton added. "The elevation fools the eye into thinking it's actually a two-storey terrace, but in fact you have to go down a few steps to the entrance."

Each property features a frameless oriel window that projects from the upper storey to add interest to the facades so the view along the mews is not purely one dimensional.

The glazing used is opaque on the front and transparent on the sides so occupants may sit in the window seats and look up and down the street without overlooking the adjacent homes.

The buildings are all clad in a reclaimed stock brick that helps to soften the geometric, contemporary design and echoes the tones and textures of its historic neighbours.

The surface of the mews street features cobbles salvaged by Caravona from a previous project, which are combined with similar stones sourced to complement the traditional aesthetic.

The houses are entered through wooden gates leading to private courtyards, which are flanked with glazed surfaces incorporating a door leading into the open-plan living area.

A set of double doors can be used to partition off a space at one end of ground floor, which can be used as a separate study or bedroom.

The only circulation in the buildings are staircases that are tucked into a corner of the plan. The stairs ascend to an upper floor containing two bedrooms and a bathroom.

In addition to the oriel windows, the bedrooms at the front of the houses have another window overlooking the courtyard. The rear bedrooms incorporate double doors opening onto a compact roof terrace.

Peter Barber Architects was established in 1989 and is based in a converted Victorian print works in London's King's Cross.

The studio has completed numerous housing projects in the city, including a row of terraced homes featuring monolithic brick facades punctuated by recessed arches and balconies. It also designed a mixed-use complex that uses turrets, setbacks and balconies to break up its large mass. 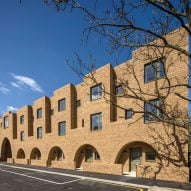