A team of architects, planners and engineers has won a contest seeking ideas for how the UK government could instigate growth in the Cambridge-Milton Keynes-Oxford corridor, with plans to revitalise six villages by adding housing, and a network of cycling and pedestrian routes.

Their proposal focuses on developing six villages to the southeast of a new railway station on the route between Oxford and Cambridge. The idea is that the plans could be repeated in other locations across the arc.

"Our re-imagination of the 21st century village will provide new homes and working environments, whilst retaining the strong character and identity of existing Cambridge-Milton Keynes-Oxford corridors," said Featherstone.

"This is a real opportunity to reinvigorate the social infrastructure, creating lifetime villages with mixed tenures and integration of shared spaces, where people can live, work and socialise together."

The unveiling of the winning proposal follows the release of the government's Autumn Budget, which details plans to develop the area into the UK's answer to Silicon Valley – built around the Oxford and Cambridge universities, and their pioneering research programmes.

To do this, there will be major investment in housebuilding to provide one million new homes in the area by 2050. There will also be improved transport links including a new East-West Rail link and an Oxford-Cambridge Expressway by 2030.

This move was based on research by the National Infrastructure Commission (NIC), which found that failure to support the Cambridge-Milton Keynes-Oxford corridor would "jeopardise growth, limit access to labour and put prosperity at risk".

The NIC teamed up with Malcolm Reading Consultants to launch the Cambridge to Oxford Connection ideas contest.

The brief asked entrants to address the arc encompassing the urban centres of Cambridge and Oxford, as well as Milton Keynes, which together contribute £90 billion to the economy each year and are home to 3.3 million people.

The VeloCity team, who met while participating in cycling events, saw off competition from 57 other entrants to win the competition.

VeloCity could be replicated across the region

The team's proposal looks at the development of the region over the course of 30 years. It includes the sensitive introduction of additional housing, public transport links and – true to the origins of their friendship – cycling infrastructure.

"The successful implementation of this strategy allows for traditional planning policy to be turned on its head and locations that were previously seen as unsuitable for growth transformed into well-connected and sustainable places," said Ross.

"Our proposal addresses people, place and the process how to effect big change over time. It is important to see the National Infrastructure Commission recognise this placemaking approach as an essential and integral part of large-scale infrastructure planning," added Marko.

Large expanses of shared open space are also included in the scheme, to help retain the countryside aesthetic while introducing improved infrastructure.

"VeloCity is the result of a planning strategy that seeks to ensure the sustainability of the countryside while unlocking the potential for economic growth," said Riches.

"We want development to strengthen the identity of village centres – adding housing density that will in turn support local village economies, rather than sprawling along roads as a car-dependent endless suburb." 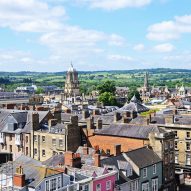