More supertall skyscrapers were completed in 2017 than any previous year, with the tallest coming in at 599 metres, according to new industry research.

The annual report from the Council on Tall Buildings and Urban Habitat (CTBUH) reveals that 144 supertalls – skyscrapers of 200 metres or higher – were finished in 2017, across 23 different countries.

That makes 2017 the fourth consecutive record-breaking year in tall-building construction, showing that the trend for towers is in no danger of decline.

"The data from 2017 shows a continuation of the trend towards a greater global proliferation of skyscraper construction," said CTBUH executive director Antony Wood.

"High-rise construction is no longer confined to a select few financial and business centres, but rather is becoming the accepted global model for densification, as more than one million people on our planet urbanise each week."

The report states that skyscraper construction has grown steadily over the past four years – so much so that the number of new towers built in 2017 is more than double what the figure was in 2013.

This year was also the most geographically diverse for high-rises, encompassing 69 cities in 23 different countries. Thirteen cities saw their first 200-metre-plus building complete, and 28 cities were given a new tallest building this year.

CTBUH sees this as proof that the construction industry has recovered from the 2008 economic crisis.

"In 2007, only 20 cities across the globe completed 200-metre-plus buildings – the highest number on record at the time. A decade later, the number of cities represented in this report has more than tripled."

As with previous years, China is still by far the dominant country for skyscrapers. And, for the second year in a row, the Chinese city of Shenzhen has emerged as a hotbed for high-rises – just like last year, the city has more skyscraper completions than any other country on the list bar China.

The 12 new supertalls in Shenzhen this year include the tallest building of 2017, the 599-metre-high Ping An Finance Center by KPF, which is now the fourth-tallest building in the world.

Other notable skyscrapers to complete this year include KPF's 555-metre-high Lotte World Tower in Seoul and the 425-metre-high Marino 101 in Dubai, designed by National Engineering Bureau.

CTBUH expects the trend for skyscraper construction to continue to rise, and predicts another record-breaking year in 2018.

"Asia – and China in particular – still leads the world in 200-metre- plus building completions, but the region may start to lose its dramatic lead as other regions, such as Africa and India, pick up the pace," reads the report.

"North America, which for much of the 20th century completed the majority of 200-metre-plus buildings in the world, is also beginning to see a resurgence in tall building construction," it continued.

"In addition, new technologies and increased international capital flows are facilitating the creation of ever-taller skyscrapers." 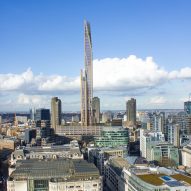