O'Sullivan Skoufoglou Architects has rearranged the ground floor of a Victorian terraced house in north London and introduced a material palette to the extended space that complements the original brick walls.

The practice headed by architects Jody O'Sullivan and Amalia Skoufoglou was asked to develop a proposal for reorganising the ground-floor of the house in Highbury to improve the living spaces for a family with two children.

A series of cramped rooms and a neglected yard at the rear of the building were reconfigured to create an open-plan room lined with glazing that creates a stronger connection with the garden.

The new room accommodates several functions and takes on a role as the house's main communal space, which can extend out onto a sunken patio by retracting a large sliding door incorporated into the glazed surface.

"The clients wanted to create a larger space for family use at the back of the house because that's where they spend most of their time," O'Sullivan told Dezeen.

"That's why we wanted to get three main uses in there, so there is the kitchen, dining table and a seating area where the kids sit when they come home from school, or the mum can hang out with her friends."

The architects removed the unnecessary internal walls and extended the building 1.5 metres from the existing rear facade to provide more space around the new dining area.

Pushing the end wall back towards the garden also allowed a single-leaf door at one side to be recessed, which helps to articulate the facade.

This doorway offers an alternative way to reach the garden during times of the year when opening the sliding door would bring cold air into the interior.

The area occupied by the small courtyard to one side of the building was also integrated into the extension. A new brick surface lining this space is left exposed but finished with a white slurry to create a textural contrast to the kitchen's own white wall.

The clients wanted to retain an exposed brick wall that formed part of the original extension, which prompted the architects to identify materials they could add to the space that would complement this textural surface.

The exposed joists supporting the extension's new roof are made from Douglas fir, which is also used in plywood form for a recessed shelving unit and bench in the dining area.

Frames for the windows that fill the opening at the rear of the space are made from sapele wood, which was chosen to echo the warm tones of the Douglas fir.

The clients specified a polished concrete floor that unifies the space, as well as the classically styled kitchen units featuring stone and marble tops. A roof light introduced above the cooking area allows daylight to pour into the kitchen.

"With a lot of these residential rear extensions the real challenge is that people don't want to move away from their comfort zone," added Skoufoglou, "but we worked with the clients to show them how a more radical scheme could make this a space that is a great place to hang out."

A bathroom on the first floor was also refurbished as part of the project. The architects continued the timber detailing from the ground floor into this new space, which features a window framed with sapele wood.

The shower has its own enclosure rather than being screened off to enhance its separation from the rest of the space. Terrazzo flooring extends throughout the room and a new roof light illuminates the shower.

Skoufoglou and O'Sullivan set up their studio in 2016, having met while working together at deBlacam and Meagher Architects in Dublin 15 years previously.

The practice's previous projects include another extension to a London home where they inserted a timber box that opens onto a brick-paved garden.

Photography is by Ståle Eriksen. 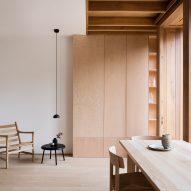