This week on Dezeen, Apple's chief designer Jonathan Ive responded to "utterly bizarre" criticisms of Apple's new headquarters and Muji's art director Kenya Hara revealed what it's like to work for the Japanese retailer.

In a recent interview, British designer Jony Ive strongly defended the new Foster + Partners-designed Apple Park in Cupertino, explaining that it "wasn't made for other people".

It was also revealed that 50-year-old Ive will be returning to a more hands-on role in managing the company's hardware and software divisions.

Muji's art director Kenya Hara discussed the brand's pared-back aesthetic and approach in an exclusive interview with Dezeen, in which he pointed to the retailer's broad product line as the building blocks of its popularity and success.

It was revealed that 2017 was a record-breaking period for global skyscraper construction, as the annual report from the Council on Tall Buildings and Urban Habitat revealed that 144 supertalls were completed in 23 countries.

In a related story, new images were released showing the interior of Japanese architect Shigeru Ban's tower in Vancouver, which its developers say will be "world's tallest hybrid timber structure" at 71 metres.

In other architecture news, 62 projects were announced for the shortlist of the second RIBA International Prize, ranging from small housing projects to major new museums by firms such as BIG, Zaha Hadid Architects and Heatherwick Studio.

Another end-of-year list was announced when the organisers of Frankfurt Book Fair revealed their 10 best architecture books of 2017  – including a photography book exploring movie theatres in South India and a satirical take on the Eiffel Tower.

In tech news, a security robot deployed by the San Francisco branch of the Society for the Prevention of Cruelty to Animals to ward off homeless people was forced off the streets after being knocked over and covered in feces.

Popular projects on Dezeen this week included a historic brick bank building in Alabama converted into a community library, the eccentric interior of Doha's Mondrian hotel designed by Marcel Wanders and a "choir-like" installation made from reflective tubes placed in front of New York's Flatiron Building. 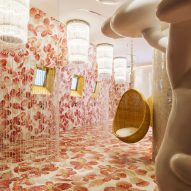