Kieran Timberlake has completed work on the US Embassy in London, a glass cube swathed in shimmering sails of plastic that is set on a plinth and surrounded by a moat-like pond on the edge of the River Thames.

The Philadelphia-based firm won the competition to design an embassy to embody the "ideals of the American government" back in 2010 and the building broke ground in 2013.

The new embassy was unveiled to the press last week ahead of its official opening in January 2018, when staff will begin moving into the building.

The £750 million building, which replaces the previous Eero Saarinen-designed address in Mayfair, has been engineered to balance impenetrable security standards with a visual language of openness.

The 65-metre-tall, 12-storey cube has a facade of laminated glazing enveloped on two sides with a transparent film of ethylene tetrafluoroethylene (ETFE), the same type of plastic use for the bio-domes in the UK's Eden Project.

The "transparent crystalline cube" is intended to symbolise "transparency, openness, and equality", according to the architects.

Kieran Timberlake, which has a reputation for designing sustainable architecture, has integrated features such as solar panels into the design of the building.

The unusual form of the building's facade is designed to minimise solar gain and glare while still allowing natural light in. The reflective facade shifts in colour according to the weather and the position of the sun.

The 48,128-square-metre embassy, which was commissioned during Barack Obama's presidency, also makes use of responsibly sourced materials that demonstrate a commitment to "mapping a passage toward a diplomacy for the environment".

In June 2017, the American Institute of Architects and the US Green Building Council denounced US President Donald Trump for pulling the country out of the Paris Climate Agreement.

Visitors will enter the embassy through a pavilion on the northern side of the campus, before passing along curving pathways in the landscaped gardens and over a pond set into the large protective plinth the main building rests upon.

Critics have pointed out that this yet-to-be-filled pond surrounding the building appears as a protective moat to rival the Tower of London's.

The pond is part of the as site's stormwater strategy, with the aim of reducing strain on London's sewer system and providing a water source for the gardens.

A linear park is planned as a nod to traditional English city parks, planted with native oak trees and tall grasses and wildflowers to recall both America's rolling prairies and the original wetlands that once occupied this stretch of the Thames.

An imposing colonnade runs around the lower floors of the building, which has three entrances. The main entrance for staff and official visitors, a consular entrance for passport and visa enquiries, and a service entrance for maintenance staff and deliveries.

Curving walkways inside the building spiral round the floors, each of which has an interior garden representing the many varied landscapes found in America, from the deserts of the Canyonlands national park to the lush Pacific Forests.

The embassy includes public areas, work areas, ceremonial and symbolic spaces, and dining rooms. Flexible work spaces are designed so they can be adapted by embassy staff and have been placed on the perimeter where there is natural light and views of the city.

A ground-floor consular lobby leads to waiting areas on the first and second floors with views of the pond and the Thames. The main lobby on the ground floor opens to a gallery, grand staircase and events hall.

Along with the responsibly sourced materials, pond and the facade, sustainable initiatives in the building include a ground source heat pump that extracts warmth from the ground, combined heat and power units that generate heat and power simultaneously and demand-controlled ventilation.

The architects claim that the environmental standards will go beyond the LEED Platinum and BREEAM Outstanding sustainability ratings that they are targeting.

The embassy is located in Nine Elms, an area on the the southwestern bank of the Thames currently undergoing widespread regeneration.

Its new location is closer to government offices and Houses of Parliament in Westminster than its Mayfair predecessor, which is being converted into a hotel by David Chipperfield.

The architects contributed to the local redevelopment effort by including a plaza and park connecting Thames embankment and Nine Elms lane to a new pedestrian greenway between Vauxhall Station and Battersea.

The £750 million needed to finance it was raised through selling off other US government properties in the city.

Kieran Timberlake was founded by American architects Stephen Kieran and James Timberlake in in 1984. A recent project from the firm was a house in New York State with a mirrored facade that reflected the surrounding forest. 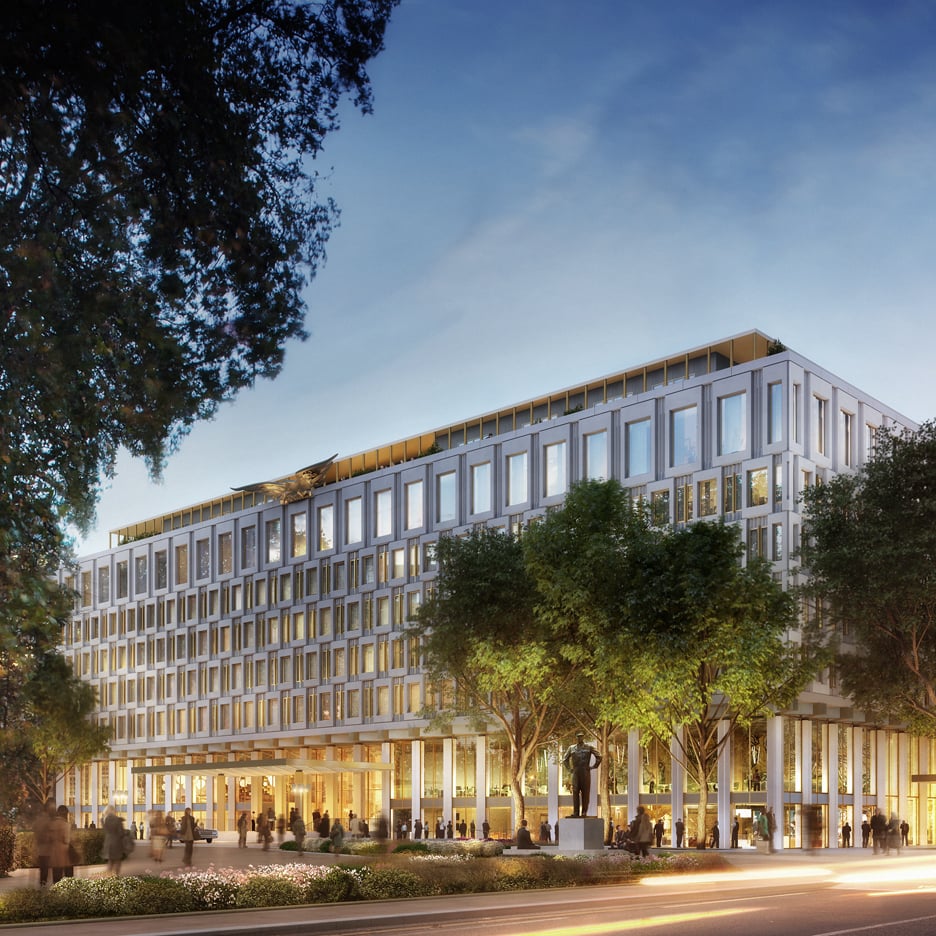