French studio Malka Architecture has revealed plans to renovate the interior of the French embassy in Vienna and top it with a collection of nature-informed art nouveau-style "light cannons".

The embassy occupies two art nouveau-structures from the early 20th century in Vienna's city centre. Malka Architecture plans to renovate the interior of both government buildings and add a vertical extension to one of them.

The extension will consist of a cluster of alcoves, which will be added to the smaller of the two buildings that make up the embassy.

The studio calls these "circular light cannons," as they will bring light into the interior, and says they are an ancient invention.

"Created in ancient Egypt, this system enables to collect, amplify, and diffuse natural light in the whole building, while creating natural ventilation," it stated.

The design of the extensions takes its cues from 20th-century art nouveau architecture, as well as historical references from surrounding buildings.

"The architectural heightening of one of the buildings was logically thought in the spirit of art nouveau, materializing the union between France and Austria, both very active in this movement," said the studio.

"In this 21st-century art nouveau project, rhythms and curved shapes inspired by nature are no longer used as an ornamentation but in the daily use of its architecture." 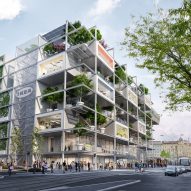 Each of the extensions has an organic, petal-shaped form that curves and arches to create an alcove-like volume.

Two rows will cover the roof of the building and face outward to the street. The first row will line the edge of the roof, above the structure's three elevations, and the second will be placed directly behind.

The volumes will be prefabricated offsite, in an effort to reduce construction time, and wrapped in a pale green colour to reference the patinated copper roofs and roof detailing of nearby buildings.

The interior of the alcoves will mimic the stone exterior of the existing building and have a stacked brick-like pattern.

Elsewhere in Vienna, IKEA unveiled plans to build a car-free store that will be adorned with over 100 trees across its exterior. In 2019, OMA released plans for The Link department store and hotel also in the city.