The Chinese rice farm that was recently named World Landscape of the Year is designed to teach people about traditional agriculture, according to Stanley Lung of landscape architecture firm Turenscape.

Located in China's Hunan Province, the farm forms part of the Chengtoushan Archaeological Park. It features a network of pathways that allow visitors to walk freely through paddy fields, observing farmers at work.

The project was named World Landscape of the Year 2017 at this year's World Architecture Festival, which took place in Berlin last month.

In this movie filmed by Dezeen, Stanley Lung of Turenscape explains how the park was designed as an "outdoor rice museum", paying tribute to the 6,500-year history of this farming area.

It invites visitors to participate in agricultural activities, by allowing them to get involved in planting and harvesting crops. 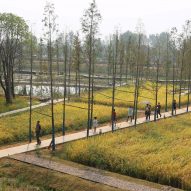 World Landscape of the Year 2017 goes to Chengtoushan Archaeological Park

"We want the younger generation to take away from this project, its learning about where food is coming from, knowing your ancestor, knowing the ancient civilisation, knowing the importance of agriculture," says Lung.

"We want the people to learn their roots and history, in a very relaxed and casual way."

The pathways weaving through the fields are slightly raised, to minimise their impact on the landscape.

There is also a glass-floored bridge raised four metres above the ground, offering an elevated view over the fields.

"The park is a constant discovery," says Lung. "Children and the elderly can access the bridge very freely."

"It's made with glass flooring, so actually people can see through underneath, and at the same time it won't create shadows."

According to Lung, the government expects the project – titled Peasants and their Land – to help to boost the local economy, by attracting larger number of visitors to the area.

"It is a very poor city, which needs new elements to come in and drive the economy," he explains.

Turenscape is based in China, with offices in several different cities. The firm won the same award two years ago, for its transformation of a wetland park in Zheijiang Province.

Last year the World Landscape of the Year award went to New Zealand practice Isthmus for a series of stormwater wetlands on the outskirts of Auckland.

Dezeen was media partner for the World Architecture Festival, which took place in Berlin in conjunction with the Inside festival of interior design.