Dezeen has teamed up with Antwerp-based design label Valerie Objects to give away three sets of accessories by Belgian design duo Muller Van Severen, including a stack of colourful food-serving platters and a sculptural trivet.

This competition is now closed. Congratulations to the winners, which are Demet Guiliz Uslu from Gaziemir, Turkey; Jillian Mcfadyen from Crossford, Scotland; and David​ ​Metcalf from Ashington, UK.

Three readers will each win both the Five Circles platters and Trivet, both of which were launched by Muller Van Severen and Valerie Objects earlier this month, ahead of the holiday season.

The colourful Five Circles are a series of colourful disks that can be used for carrying and serving food.

Three are made of polyethylene plastic and two are marble – designers Fien Muller and Hannes Van Severen describe these as their two favourite materials.

When stacked together, the disks form a colourful sculpture on the dinner table.

"Let's not hide the objects we use, let them be part of the interior," said the designers.

The Trivet is made up of a variety of geometric shapes, in assorted sizes and colours. When hung up, the assortment of shapes creates an angular wall piece.

To test that the trivet could protect a table from heat, the designers said they placed it on a polyethylene surface – a plastic that can't withstand heat – and set a "pan full of sizzling hot sausages" on top.

Muller Van Severen are best known for furniture collections including Future Primitives. The duo has previously worked with Valerie Objects to create a furniture and lighting for a luxury apartment in the heart of Antwerp.

The designers recently showcase the entire contents of their home for an exhibition at Design Miami.

Three winners will each receive a set of Five Circles, in the Set E colours, and a Trivet in black. Both are also available to purchase from Valerie Objects. 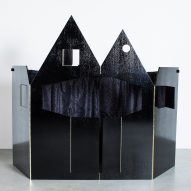