Brussels designer Alain Gilles stacked different shapes to form these totem-like side tables, which are supported by a lightweight cork base.

Gilles created the Assemblage tables for Italian brand Bonaldo. For his design, he chose to use cork as opposed to a standard solid base, and each of the side tables can be assembled in various ways.

Gilles likens the assembly to a "child's game," as each piece is placed on top of one another, and fastened together using a long bolt that runs through each piece.

"It is an assemblage of two materials that have been turned, the cork and the wood, but that has a very different finish – as if they were two entities not made to be matched together."

By topping the cork bases with a dense wood surface, Gilles intended to reverse the ordinary composition of furniture where the base is the heaviest element.

"With the Assemblage table, the mass that provides the stability to the base is constructed of cork," he said. "Cork is visually a very present material with its typical multicoloured structure, but with its low-density aspect is usually associated with a lightweight material that floats, rather than a material which lends stability."

"The cork – the material with the lighter mass – is treated in the design as the weight that holds the table up, thus creating a dialogue within the piece itself," he added.

This inversion of the load-bearing base of furniture items is a continuation of Gilles' Mass tables, which sees bases made from bent metal frameworks that resemble crinoline petticoats.

"I started working on a discussion between actual weight and visual weight, or mass, with the Mass table I designed for Bonaldo in 2016. In this case, the typically dense base has been replaced by a lightweight metal structure, which actually happens to be visually very present," said the designer.

"This makes its visual weight the opposite of its actual mass; the table top in heavy wood or marble is the heaviest part, but also the most simple graphically."

The designer has created several pieces for Bonaldo, including an extendable table that revealed its inner workings, and furniture that sits on brightly coloured sloping legs. 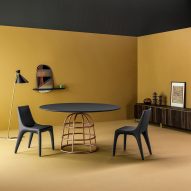