The bases of these tables by Brussels designer Alain Gilles are made from bent metal frameworks that resemble crinoline petticoats.

The furniture, which was created for Italian brand Bonaldo, is designed as a contrast to the larger, more solid bases that often support dining tables.

The tabletop is anchored by a single point at the centre, making it appear to float above the metal support, which resembles the kind of wireframe model often used during the design process.

"In a way, the base is a subtle mix of tradition and modernity," said Gilles, who recently unveiled an easy-to-assemble chair as part of an office furniture installation at this year's IMM Cologne.

The designer has created several pieces for Bonaldo, including an extendable table that revealed its inner workings, and furniture that sits on brightly coloured sloping legs.

Gilles took reference from the brand's own heritage as a specialist manufacturer of funiture parts for the Mass tables, using a process that blends technology and human craftsmanship.

To create the base, computer numerically controlled machines were used to bend and cut each tubular section. The framework was then finished off by hand, by a welder.

"The end result is a graphic table which has a strong personality but doesn't take up too much room visually," said Gilles. "It is also a table which generates visual tension and movement as one moves away from or around it."

Mass tables are available in several different finishes, and with a wood, glass or marble tabletop. 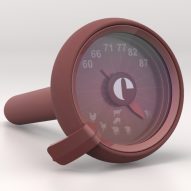