Foster + Partners is transforming a former government headquarters tower in Hong Kong into a luxury hotel, retaining the building's original modernist facade and providing panoramic views of the surrounding skyline.

The hotel is due to open early next year inside The Murray Building – a 27-storey tower on Hong Kong's Cotton Tree Drive that was designed by architect Ron Phillips almost 50 years ago to house offices for several governmental departments.

The building is part of Hong Kong's Conserving Central Initiative, and is a recognised historic landmark. The conversion by global architecture firm Foster + Partners retains much of its original modernist character, while upgrading the interior to suit its new use.

The design by Phillips focused on achieving a pleasant environment for the office workers, with skewed, recessed windows ensuring that direct sunlight does not penetrate the building.

Foster + Partners was impressed with the original building's pioneering sustainable features, and therefore left the facade largely unaltered when converting it into the hotel.

"The architecture of the building is in direct response to the climate of Hong Kong, with recessed windows, carefully orientated to avoid the harsh tropical sunlight," said the architects in a project statement.

"The new design retains the facade while upgrading other aspects of the building and extending its life by introducing new functions appropriate for the changing demands of the city – giving it a sustainable legacy for years to come."

In addition to remodelling the former office floors to accommodate 336 guest rooms and suites, the architects are focusing on improving the relationship between the building and its surrounding urban context.

A new street frontage will incorporate a transparent and welcoming entrance, while the landscaped grounds will be extended to accommodate a public tai chi area.

A large tree that has existed on the site for many years will also be preserved and rise up through a podium that extends from the building's base towards the adjacent highway.

Below the grid of concrete blade walls, the tower's base features a series of arched openings that introduce a classical aesthetic to the pure-white tower.

The hotel's rooftop bar will provide views of Hong Kong's central business district and a nearby park, while a range of restaurants and bars will also be accommodated, along with meeting and events spaces.

The Murray is the flagship property of luxury hotel group Niccolo Hotels and will open fully for guests in early 2018. 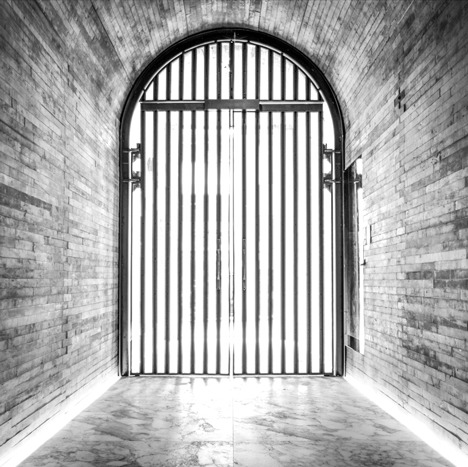