Australian designer Tom Fereday has created a minimal dining chair with an adjustable curved backrest, which he based on seating found in old factories.

Called Sia, meaning movement in Hindi, the chair is named after its adjustable backrest that tilts to follow the body's form.

"The dining space is often tricky in terms of space available," Fereday told Dezeen. "I wanted to develop a slim dining chair that would be accessible to anyone no matter where they lived, but didn't compromise on the luxury and comfort of dining; something that could fit in anyone's home; that you could put 10 around a table and it wouldn't feel crowded."

"The brief I set myself was to create a slim chair that was comfortable," he continued. "Quite often with those types of chairs the compromise is comfort, so that was the reason for developing the articulating backrest."

Fereday, whose studio is based in an industrial warehouse in the Camperdown suburb of Sydney, Australia, was inspired by the design of traditional factory chairs.

The chair's sculpted solid ash seat are set within a minimal stainless steel frame that allows them to be stacked.

The slim backrest pivots around the steel frame on a series of solid bronze, self-lubricating sleeve bearings that enable a smooth adjustment.

The backrest is simply press-fit assembled using the natural flex of the steel frame. Fereday stated that this allows for minimal shipping volume and easy end-of-life recycling or repair.

After being named by Dezeen as one of seven designers to watch from the Stockholm Furniture Fair, Fereday has had a busy year.

During Melbourne Design Week he was one of 26 designers to adapt a replica of Jasper Morrison's Hal chair in an exhibition that drew attention to Australia's legal replica furniture market.

At Milan Design Week, in a 12th-century church courtyard, he showcased a wire chair that was created for new furniture brand SP01, whose unique selling point is that its furniture can withstand the Australian outdoors.

Working with artist Susan Chen he developed a delicately ridged 3D-printed pendant light that takes two and a half hours to 3D print from one piece of extruded clay, and also created a series of custom-made tables and chairs for the Louis Vuitton store inside Sydney's Bondi Junction shopping centre.

Photography is by Fiona Susanto. 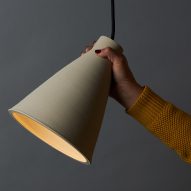