A brutalist megastructure in Seoul is undergoing a major revamp. The result may not be photogenic, says Owen Hatherley, but it offers a promising model for regeneration without gentrification.

The most interesting architectural experience I had in 2017 was a walk in Seoul. The map given out at the Seoul Biennale of Architecture and Urbanism included a small outlined route to "walking the commons" through public paths and parks. Some of this was quite straightforward infrastructure, whose public reputation is often deceptive.

The Seoullo 7017 walkway, despite the bulky plant pots by MVRDV, is no Garden Bridge or High Line for contemplation and lingering, but instead a brusque thoroughfare, and the only logical means to cross one of the most horrendous road junctions I've ever seen.

The Chonggyecheon stream, a supposedly rus-in-urbe piece of green infrastructure replacing a flyover, is restless and busy with public art, advertainment and clutter.

Meanwhile the Dongdaemun Design Plaza – the Zaha Hadid mega-project where some of the Biennale's main exhibitions were held – is a fabulous landscaped space running under and over some grim windowless galleries and malls.

But at the heart of all of it was Sewoon Sangga, a shopping, industrial and residential complex built in the late 1960s. What is happening here is, quietly, quite extraordinary.

Sewoon Sangga was designed by the architect Kim Swoo-Geun during the long era of developmentalist dictatorship in South Korea, when planning and building an industrial economy, fast, took precedence over everything else. The first part of the name means "attracts all the energy of the world", while the second means "shopping mall".

Accordingly, the building is dramatic. It consists of four interlinked sections (one since demolished) that are together the size of a small town, cutting a rectangular path through the alleys and winding streets of the historic city and a post-Korean War refugee settlement. 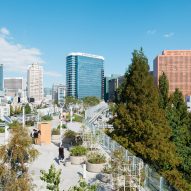 "Seoullo is no High Line, but it is of equal importance"

As everyone knows what to do with declining brutalist megastructures, it had been slated for demolition by the previous mayor. The recently elected Park Won-Soon administration decided to renovate it instead, via a process of consultation with a local residents committee, as "a hub of urban culture, tourism and industries".

Speaking as a tourist, I could interpret it as some fulfilment of a now half-remembered idea of what the future was meant to be like in the 1980s: ultramodern, unsentimental, high-tech, but also provisional, noisy, slightly chaotic. The new spaces attached to it include new walkways filled with young architectural firms and a "production city" of robots in an internal hall. A square in front offers incongruous views of an ancient shrine, and a lift goes up to the roof, where they are growing cabbages.

It is exactly the sort of place that contemporary urbanists and architects talk about creating – combining recycling, reindustrialisation, automation, density, urban agriculture, live-work spaces, democratic accountability, permeability, complexity... but generally, they end up creating relatively conventional gallery-malls like Dongdaemun Design Plaza instead. But at Sewoon Sangga, they can plug themselves into an already functioning infrastructure that already fulfils many of those ideas.

Unlike Zaha's building up the road, this bulky, linear structure is not a photogenic concrete artwork

There are so many exciting implications of what is happening in Sewoon Sangga that it's hard to know where to start. All the boring New Urbanism rules are broken, with separation of pedestrians and (heavy, freight) traffic, plenty of overhead walkways and a total break with the urban morphology all around – although less dogmatic Jane Jacobsites might point out that this is a teeming, mixed-use place where zoning has always been irrelevant.

As a way to invigorate a post-war modernist project, it is completely without nostalgia or fetishism. The various ad-hoc cladding and renovation solutions over the years are all still visible. Unlike Zaha's building up the road, this bulky, linear structure is not a photogenic concrete artwork, and has little coffee-table appeal. The new walkways are straightforward steel frames, clipped onto the concrete. It also shows what can happen when you have an intelligent and imaginative City Architects department (as Seoul does, with a 60-strong team under Kim Young-Joon), able to oversee and enforce an urban plan.

But what might be most unusual is what this place means for ideas of development and growth, not just of the hyper-charged kind that defined post-war South Korea, but for any city which has staked itself on growth at any cost. In a statement in 2016, the mayor called it "the first urban renewal plan which places more importance on the prevention of gentrification than development".

Guarantees have been given to existing residents and businesses that they will not be moved on. It's too early to say yet whether this will be successful, and certainly it is extremely easy to spot the difference between the clean new "makerspaces" and "fablabs" on the steel walkways and the dusty arcade game repairers, CCTV tinkerers, poster shops, neon salesmen, lamp emporia and so forth in the original building. And this deals with only one part of the three-part complex – one piece was turned into a hotel several years ago, but behind that is another segment obviously in deep decline. But as a start to a wider project, it has quite some promise.

This is what London could have done at Elephant and Castle or the Brunswick Centre, or Sheffield at Castle Market and Park Hill, Glasgow at the Anderston Centre, to name just a few of the destructive, homogenising "regenerations" of recent years. That South Korea, a country built on development at all costs, can be more sensitive about this than Britain, says a huge amount about the self-induced lobotomy planners and councillors have inflicted on themselves here.

But maybe that experience is what explains the shift. During the Biennale I heard a talk by the mayor, in which he claimed that Seoul was no longer interested in growth. Now, usually ideas of "de-growth" imply something Garden City-like, anti-modern and puritan. This thrilling, complex place suggests something different – that after growth can come an architecture more intense, more exciting, than the bland spaces of corporate regeneration.