The Winchester-based architecture studio will develop a six-building scheme for Gordon Murray Design (GMD) close to their existing headquarters in Shalford, Surrey.

Renders show glass-fronted buildings with modern and classic cars displayed in the windows looking out over water features and a courtyard with pathways between buildings.

Despite having previously designed the McLaren Production Centre on the outskirts of London, international architecture firm Foster + Partners missed out on the GMD contract to the smaller studio.

"The cross-over between automotive design and buildings has fascinated architects ever since the first production car was completed," said Design Engine founding director Richard Jobson.

"It is therefore incredibly exciting to develop a series of buildings which will enable GMD to continue to be at the forefront of global car design."

Design and engineering company GMD uses Formula One technology in their patented lightweight and low-carbon iStream design process to produce concepts, designs, and prototypes, such as the T25 city car.

A highlight of his 50-year career was designing the McLaren F1. Able to accelerate from 0 to 62 miles per hour in 3.2 seconds and with a top speed of over 240 miles per hour, it's widely regarded as the "world's greatest car".

With only 64 road models ever made, it's also one of the world's most desirable cars. In July 2017  one of the rare models sold at auction for £15 million.

Design Engine's GMD scheme will be submitted for planning permission in February or March 2018, with construction due to start in July this year. Due to be completed in three phases, the finished complex will cover 8,500-square-metres.

The Design and Engineering Block will be completed as part of phase one, the headquarters and restaurant buildings in phase two, with the remaining buildings built during the third and final phase.

Another building with bays for building car prototypes appears to feature colour-coded steel girders in yellow that can be separated with roller shutters. Glass-fronted offices and galleries will overlook these centres of activities.

Design Engine was founded in 1999 and has studios in both Winchester and London. In 2014 the studio's John Henry Brookes Building for Oxford Brookes university was awarded a RIBA national prize.

Last year the studio designed a restored the gothic-revival chapel at the University of Winchester and added a glowing gold extension. 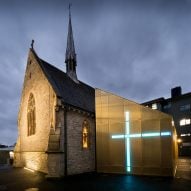