London designer Stephen Johnson has developed a colourful adhesive dough that is strong enough to bond parts of furniture together.

The synthetic dough, called PLAY, is designed to look like children's modelling toy Play-Doh, but to function as a strong adhesive. It can be used to bond a range of materials, including wood, glass, marble and metal.

Johnson developed the product after trying and failing to use toy dough in the manufacture of his own furniture designs.

"The objective was to design functional products using kids dough, but given its soft nature it's just not feasible," he told Dezeen. "I needed a material that looked and behaved in the same way but became rigid over time."

"There were several products on the market that came close but ultimately fell short on the key characteristics of kids dough, like its silky texture and satisfying feeling when squashed in the hand," he continued.

"It was vital to capture these intrinsic properties but with the added benefit of curing incredibly hard. So my only option was to develop the material myself."

The designer has spent five years developing his PLAY dough. He is keeping quiet about the exact recipe used, but says it is a hybrid of synthetic and organic matter.

The substance is designed to be easy to mould, but to also have an "instant grab" once stuck to something. He hopes it will instil the creative freedom of children in other designers.

"It was vital we captured the same vivid colours and mixing properties as the kids version," Johnson said.

"It is about the innovative freedom we had as kids, being spontaneous, putting objects and materials together without restriction – designing in the moment with our hands, imagination and the things we have around us."

Johnson has created a range of tables to demonstrate the strength of the material. The dough was squashed into joints between surfaces and legs and left to set for a few hours. Once set, it remains clearly visible.

The designer also suggests that the dough be used as decoration. He has used it to add colour to a pair of pendant lights, by compressing it onto the underside of each dome.

"Each light is both a multiple yet unique – a standardised product with a DNA of fingerprints, gestures and colours individual to each piece," he added.

Johnson isn't the first designer to launch a dough that can be used in design.

Other examples include Sugru, a modelling dough designed to allow people to personalise their belongings. 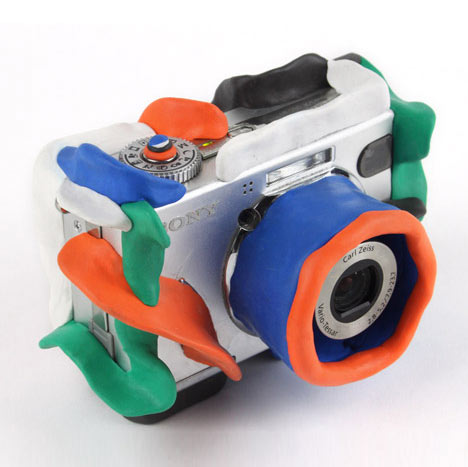