Japanese art collective TeamLab has used lighting to create a sea of spiralling whirlpools inside a Melbourne art museum.

TeamLab created the interactive digital installation at the National Gallery of Victoria as part of the NGV Triennial – a showcase of over 100 contemporary artists and designers.

Designed to look like whirlpools in water, the installation is created from "immersive and responsive" lights that project moving lines on the floor. These lights are programmed to respond to the presence and movement of people in the room.

"When a person moves, a force is applied in that direction. As a result, a flow occurs," explained the designers.

"The faster the person moves, the stronger the force is applied in that direction," they said. "If a person is not moving or there are no more people, no flow will occur and nothing will be present in the space."

The project is titled Moving Creates Vorticles Create Movement. According to TeamLab, it is intended to demonstrate the ability of humans to change the course of nature.

"Works are born and continue to transform under the influence of people's movement," they explained.

"In the ocean, complicated terrain such as an island produces flow velocity difference and a vortex is generated," they continued.

"Vortices swirl up the carcasses of organisms sunk to the bottom of the ocean, producing nutritious seawater. This becomes a source of nutrition for plankton to grow and nourishes the sea life. Vortices therefore contribute to enriching the ocean."

Mirrors surround the space, creating the illusion of an infinite ocean inside the gallery.

Formed in 2001, TeamLab is an interdisciplinary collective that aims to explore the relationship between humans and nature through art, design and technology.

Past projects include a series of projections in a Japanese park, including a digital waterfall and a pond filled with virtual koi carp. 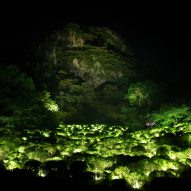