A mirror-clad pavilion camouflaged in woodland and another resembling a dilapidated shed are among five temporary structures on show in the grounds of the Alvaro Siza-designed Serralves Foundation in Porto.

The pavilions are part of a show titled Live Uncertainty: An Exhibition After the 32nd Bienal de São Paulo. The show explores the anxieties currently facing society and how they are being depicted through the medium of contemporary art.

The show is part of a series of travelling exhibitions taking place following the São Paulo's 32nd Bienal, which took place September to December of 2016.

The Porto-based cultural institution the Serralves Foundation comprises a park, art-deco villa, and a museum designed by Portuguese architect Alvaro Siza in 1992.

For the Live Uncertainty exhibition, the organisation approached five local architecture studios to each create a pavilion that could display work from a variety of artists.

Fala Atelier responded to the open brief by erecting a folly on a sloped patch of grass within the park.

Encased within a timber frame, the cube-shaped structure features two geometric cut-outs that act as entrances for visitors. These are covered by dusky pink curtains, which contrast a deep blue band of paint that runs along the pavilion's upper edge.

The practice then placed two circular disks of black marble at seemingly random points of the folly's facade.

"It's a playful combination of pragmatic seriousness and frivolous irony. A composition where each element has its own value, complementing and contradicting each other," explained the architects.

Architects at studio depA wanted to directly reference the design and natural landscape of the Serralves building in their pavilion, which sits adjacent to one of the park's lakes.

To do this they gave the structure a polygonal shape, which echoes the museum's series of angular windows, and clad it in a mirror-like material that reflects the surrounding foliage.

The team at Fahr 021.3 took a similar approach to the design of its pavilion, which they wanted to "subtly connect with [the park's] natural surroundings, thus underlining the typography, vegetation, and meandering paths".

Nestled amongst a group of trees, the pointed walkway has been assembled to feature a thin gap at its floor and ceiling that lets in slivers of daylight as visitors pass through to reach the internal viewing room.

Titled Cine Barraco, which translates from Portuguese to "cinema shack", the pavilion erected by Ottotto architects is meant to resemble a dilapidated rural shed.

The practice crafted its facade from re-used sheets of corrugated metal, which were then spray painted with fading patches of red and pink as a visual nod to the salmon-coloured exterior of Serralves' villa.

Built around a steel frame, the rectilinear structure hovers above a small channel of water at its rear, which visitors can glimpse from the inside.

Diogo Aguiar Studio's pavilion appears as two concentric circles, which are both composed of four horizontal planks of timber.

Visitors can access the structure's "inner nucleus" from three different points, marked by large semi-circle openings – these cast large, curved shadows as the sun changes the position throughout the day.

All five pavilions will each be on display until 18 February 2018, while Diogo Aguiar Studio's pavilion will remain open to the public indefinitely.

Photography is by José Campos unless stated otherwise. 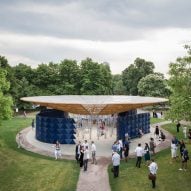