Work is almost complete on British designer Thomas Heatherwick's giant honeycomb of interlinked staircases, placed at the centre of the Hudson Yards development in Manhattan.

Images posted by Instagram users show that the Vessel structure has reached its full height, with all 154 staircases and 80 landings in place – forming a mile of walkways.

It stands as the centrepiece of Hudson Yards, a vast construction effort comprising multiple towers and public venues, which are built over a train depot on the West Side and currently rising around Heatherwick's design.

Vessel will eventually be surrounded by a public plaza and gardens, and visitors will be able to climb its metal-clad staircases for better views of the area.

The steps are arranged in layers that widen from a hexagonal base that measures 50 feet (15 metres) in diameter to a top layer that is 150 feet (46 metres) across.

Each layer was built up in prefabricated segments that were lifted by crane and slotted into place like a jigsaw puzzle.

The copper-coloured steel cladding underneath the pathways has been added, but red-orange mesh has not yet been replaced with the glass guardrails along the edges.

Heatherwick said the idea for the structure, which resembles an endless stair by Dutch graphic artist M C Escher, came from when he found an abandoned flight of wooden stairs as a student.

His team at Heatherwick Studio hopes that, as well as being visually impressive, the structure will also provide Hudson Yards with a key public feature.

"In a city full of eye-catching structures, our first thought was that it shouldn't just be something to look at," said Heatherwick when the project was first unveiled in 2016. "Instead we wanted to make something that everybody could use, touch, relate to."

The surrounding gardens designed by Nelson Byrd Woltz Landscape Architects will include a grove of trees, woodland plants, perennial gardens and a 200-foot-long (61-metre) fountain.

Hudson Yards spans a 28-acre (11.3-hectare) across the rail depot, which will remain in use. The vast infrastructure and architecture development was masterplanned by American firm Kohn Pederson Fox, which served as the architect of record for Heatherwick's Vessel.

Sixteen new skyscrapers are being constructed across the site, making it the city's largest urban development since Rockefeller Center in the 1930s.

At the other end of the High Line park from Hudson Yards, Heatherwick has also designed a pair of residential towers with bulging glass windows, which were unveiled this week.

His studio's other projects in New York have hit major stumbling blocks. The overhaul of New York Philharmonic concert hall was scrapped last year in favour for a less drastic alternative, while the future of Pier 55, a "treasure island park on the Hudson River", remains uncertain after plans were also abandoned in 2017. 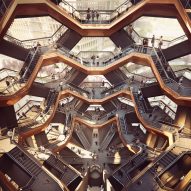