After visiting Shanghai, Delorme sought to portray his own impressions of the bustling metropolis. "We all have in mind images of masses of people working in big factories," he said. "I wanted to go in the opposite direction and focus on the individual."

In one image, a man is seen hauling an enormous pile of cardboard, presumably destined to be recycled. Another shows a woman pulling a cart that is haphazardly stacked with antique wooden chairs.

According to the photographer, many of the people that take on these jobs are migrant workers that travel to Shanghai in search of better opportunities. To him, this workforce is a critical but overlooked aspect of China's most populous city.

"For once, the stress is not on the skyscrapers, but on the migrants who walk the length and breadth of the city with incredible loads," he said. "In my opinion, these migrants are even more impressive."

Delorme views this series as a commentary on China's consumer society. "The migrant appears like a superhero able to carry around this kind of load, but we have the feeling that the objects he is carrying are about to swallow him up, that he is overwhelmed by them... just like the consumer is."

Although Delorme based the photographs on observations he made during an artist's residency in Shanghai, the images are doctored to create more visual impact.

"I break with the rules of the documentary genre as the loads the porter lifts are exaggerated in order to draw people's attention, even though we could have the first impression that the picture is real," he said. "To amplify reality can also be thought provoking; that's what I'm trying to do with my totems."

Ultimately, the colourful photographs are meant to be a reflection on contemporary China, and the "inconsistencies" that Delorme observed while he was there.

"This communist country that has become the world's factory is now the new Eldorado for the market economy," the photographer said.

Photographers from around the world have been travelling to China to document evidence of the country's economic development and cultural intricacies. Raphael Olivier captured the "ghost town" he encountered at the newly built city of Ordos, while Kris Provoost created a series presenting the most flamboyant architecture from the country's building boom. 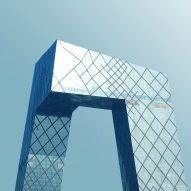