Dutch practice Eklund Terbeek combines contemporary and original features in this loft apartment, which sits inside an old schoolhouse in Rotterdam.

The building – which dates back to 1912 – was converted into six apartments after receiving funding from a group of private investors. Local architecture practice Eklund Terbeek were invited to lead the project, and were also responsible for the interior design of the building's loft space.

"One of the main challenges was to create apartments that comply with current regulations and contain all contemporary comforts, without compromising the authentic character and detailing," the practice's co-founder, Jenny Eklund, told Dezeen.

The loft apartment is composed of a hallway and two former classrooms, which have been knocked through to form one large living area.

A row of sash windows and whitewashed walls help the space feel light and airy, while concrete has been left exposed on the ceiling to create contrast with the white walls.

The rear of the room plays host to the kitchen, which is anchored by a concrete breakfast island. To add a touch of warmth, dark walnut wood has been used to form the cabinetry and nearby dining table.

A trio of transparent, spherical lamps are suspended from the ceiling beams.

Towards the front of the room is a lounge, which features a gridded bookshelf and soft grey furnishings. Overhead, a box-like volume that extends from the ceiling accomodates a study area.

Accessed via a set of stairs concealed by the bookcase, the study features a small square opening that is used to display a black Eames bird ornament.

The home's lofty five-metre-high ceilings enabled the architects to insert a mezzanine level into the hallway, which provides two extra sleeping spaces with beds slotted into the loft's alcoves.

Another mezzanine floor has also been added on top of the former headmaster's office, which now serves as guest quarters.

As the architects were keen to keep some of the building's existing features, the loft hallway features original mustard-yellow tiling.

"The interior of the apartment merges old and new, contemporary and traditional, refined and rough, into a balanced whole," said the practice.

In the bathroom, five of the school's original toilet cubicles have been preserved and each given different functions – for example, one now contains a shower.

Finished with black anthracite tiles, a mirror has been hung along the bathroom's rear wall so that inhabitants can glimpse the full length of the loft's hallway which lies directly behind.

Founded by Jenny Eklund and Dominique ter Beek, Eklund Terbeek are one of several practices who have revamped the loft spaces of historic properties. Smartvoll added a loft apartment to an old tank station in the Austrian city of Salzburg, while Emil Eve Architects created a loft inside a disused Victorian warehouse in east London.

Photography is by René de Wit unless stated otherwise. 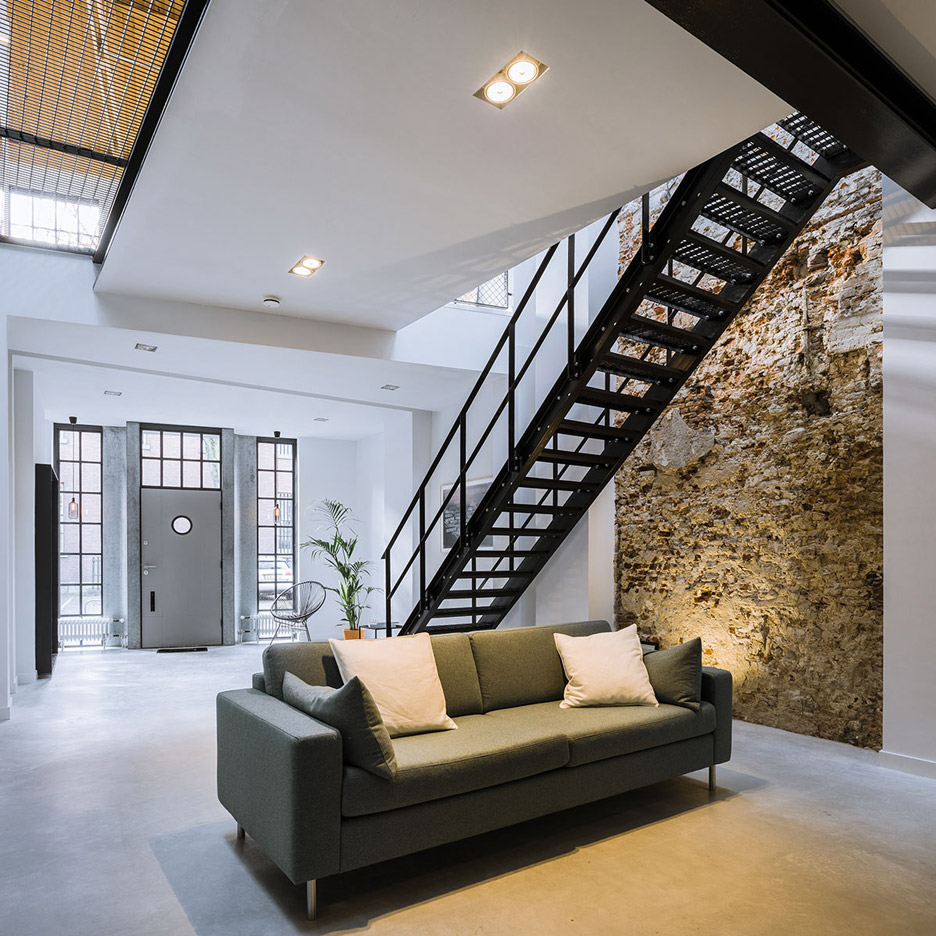