A revamped Georgian townhouse with a patio that transforms into a reflecting pool has won top prize in a contest to find the best new house extensions in London.

The project, which forms both a home and workspace for practice founders Anna Liu and Mike Tonkin, includes a glazed extension with a concave roof. This roof brings rainwater down into a harvesting tank, transforming the courtyard into a pool of water in the process.

Other features include a basement extension filled with natural light, thanks to a large plant-filled lightwell.

"Sun Rain Rooms is so exciting and glamorous – there's so much happening and it's a total transformation that makes your heart sing," said journalist Philippa Stockley, one of the judges. "It's completely innovative."

Dezeen is media partner for Don't Move, Improve! which is organised by New London Architecture (NLA) in association with RIBA London, Clippings and Architect's Republic.

Second prize was awarded to Dewsbury Road, a timber-lined extension to a terraced home, designed by O'Sullivan Skoufoglou Architects.

Two projects share third place – a kitchen extension in "matter-of-fact" materials by Al-Jawad Pike, and a house with a reconfigured staircase by Fraher Architects.

A series of special prizes were also handed out in recognition of specific achievements.

The title Most Innovative was awarded to Pop-Up Ute, a project by Friend and Company Architects that involved adding a new lightweight structure on top of an existing block. The project impressed the judges with its colourful, retro interior.

The project deemed to be the best value for money was a seven-square-metre extension to the home of MW Architects founder Matt Wood, which allowed him to completely change the layout of his living spaces.

The Best Historic Intervention award was given to Brian Heron Architects, who managed to transform an old water tank in the Denys Lasdun-designed Keeling House into a one-bedroom home.

There were also two awards presented for best use of materials – one to Office S&M for a playful renovation that included scale-like wooden shingles and yellow-framed arch windows, and one to Manalo & White for an extension clad in Welsh slate.

A three-month exhibition of 120 longlisted projects will go on show in NLA's galleries at The Building Centre from 26 January to 20 April 2018.

"Don't Move, Improve! is a wonderful showcase for the quality of architectural talent that abounds in London," said Peter Murray.

"The bespoke additions and alterations on show at NLA ensure that London’s stock of homes have a new lease of life, are more sustainable and are fit for a 21st century lifestyle," he continued.

"The exhibition shows off many excellent examples of the designers’ skill at making best use of space within the constraints of the conventional town house."

As well as the exhibition, NLA is hosting a series of deign surgeries, where Londoners wanting to extend their homes can ask for free advice from winning architects. 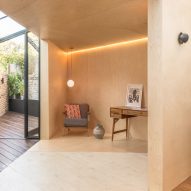