"Matter-of-fact" materials such as concrete, brick, and timber in muted tones have been used to create this extension to a family home in Stoke Newington, north London.

London-based architects Al-Jawad Pike expanded the Victorian property for a teacher, a TV producer, and their young daughter.

The studio was asked to create a new cooking and dining area that directly overlooked the garden – replacing a former kitchen that the client had complained of being cramped and dark, with views to the outdoors obstructed by a small utility annex.

The studio, which is lead by Jessam Al-Jawad and Dean Pike, designed the extension as one open space and employed simple materials in a restrained colour palette.

Grey brick walls have been paired with Douglas fir floor boards, while concrete has been used for the kitchen work surfaces. Oak finished with natural oil has also been used for cabinetry including integrated shelving.

This aesthetic was largely inspired by Belgian architect Juliaan Lampens, who is recognised for his use of concrete on the interior and exterior of buildings. Lampens' work also informed a project by architects Clauwers & Simon, which made extensive use of board-marked concrete to build a rural home in Belgium's Limburg province.

"His unusual combinations of matter-of-fact materials were a significant influence," Al-Jawad told Dezeen. "We wanted to avoid using paint as much as possible."

"The use of grey [bricks] was a subtle reference to brutalism, and combining it with the room's concrete and oak joinery elements seemed an interesting way to offset a rough surface with some refinement," he added.

A brick staircase illuminated by a skylight links the new kitchen to the original house.

Daylight also filters through from an oak-framed full-height window at the front of the extension, which slides open to allow access to the garden.

Other architecture practices have also opted to use pared-back materials for residential extensions in London. Gundry & Ducker added a sooty brick tower to the back of a residence in Islington, while Amin Taha used rugged concrete for a basement extension to a home in Bayswater. 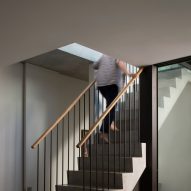