Based in Toronto, Diamond Schmitt Architects led the performance venue's transformation by updating the exterior and interior spaces, while retaining some the building's original features.

The renovation encompassed the upgrade of 20,000 square feet (1,858 square metres) of the existing building's three floors, and adding a 60,000-square-foot (18,200-square-metre) extension. A new central tower and atrium complete the project.

The original National Arts Centre was built in 1967 by Polish-born architect Fred Lebensold, as part of Canada's centennial celebrations. The building was brutalist in style, typified by its geometric, precast concrete construction and a minimal amount of windows.

Fifty years later, Lebensold's complex was chosen to be revamped as part of the country's 150th anniversary of confederation in 2017. The project received the largest investment for cultural infrastructure by the government during its celebratory programme.

Diamond Schmitt Architects converted the "brutalist mid-century bunker" into a light-filled performance venue through the use of glass and wood, while keeping some of the existing features like the terrazzo floors.

The building's new facade is clad in glass that spans roughly 25,00 square feet (2,300 square metres), while other insulated and opaque panels complete the exterior. At the centre of the arts complex is a 65-foot-tall (20-metre) tower that is wrapped in transparent LEDs.

"A hexagonal marquee tower – the Kipnes Lantern – is designed to extend the geometry of the original architecture into the 21st century and marks a new main entrance," said the architecture firm.

In addition to its new exterior, the centre has been expanded to include another stage, a new ticket office, extra wings for events, and more public space. The number of restrooms has also quadrupled.

Conference rooms now overlook Ottawa's Rideau Canal, while on the upper level, a lounge offers views of the Canadian capital's Confederation Square and Parliament Hill, which were previously not visible.

Upon entering the venue, the newly designed atrium to the north is made of steel. The space features a refurbished stairwell and new recessed panels overhead made from Douglas fir.

These triangular coffers mimic the design of the original architecture, and were pre-fabricated in a warehouse south of Ottawa, allowing for an accelerated construction schedule.

From moving employees off site and beginning construction work, the project took under two years to complete its first phase. The second will include updates for staging, lighting and sound.

Diamond Schmitt Architects was set up in 1975 by Donald Schmitt and Jack Diamond. The latter was the founding director of the University of Toronto's Master of Architecture programme.

The studio’s design for a concert hall commemorating American musician Buddy Holly in his hometown of Lubbock, Texas is under construction and will open in 2020.

Photography is by Doublespace unless noted otherwise. 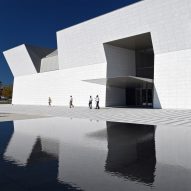