Dezeen promotion: Made.com has developed an initiative to help emerging designers bring their projects to market.

TalentLab is a crowdsourcing platform that allows Made.com to launch products by up to 200 up-and-coming designers each year.

Aspiring designers are invited to submit their proposals to the TalentLab platform. If their design gets shortlisted, it will be presented on the website.

Made.com customers are then able to vote for designs they are interested in by pledging a refundable deposit of between £10 to £30. The designs with the most pledges are put into production and will be listed on the Made.com website for customers to purchase.

The designers will be paid royalties in line with the percentage that Made.com pays all of its existing professional designers.

"We know that there are many adventurous, innovative ideas in the world that never get brought to life," said Made.com design director Ruth Wassermann.

"TalentLab will help shine a spotlight on creativity, helping designers get a foothold in the industry and helping customers get their hands on new bold designs."

Shortlisted designs currently available to back range from a minimal clothes stand by Alvaro Diaz Hernandez to a clock-cum-key holder by Studio Memphis.

Other highlights include a floor lamp that doubles as a storage hanger and a wall light that can be used as a display space.

TalentLAB replaces Made.com's Emerging Talent Award – an initiative launched in 2013, which gave a small selection of designers the chance to realise their proposed products. The new format opens the contest up to a greater number of designers.

"The success of the awards, attracting thousands of entries and tens of thousands of votes, showed that there is a huge pool of design talent but the format only allowed one winner," said the brand.

"We hope TalentLab will become the number one destination for designers; the only place where designs can be brought to life, produced, promoted and distributed to the largest customer base in Europe." 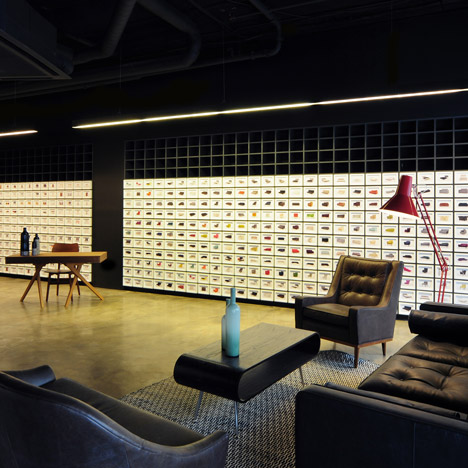 Made.com was founded in 2010 by Ning Li, Julien Callede and Chloe Macintosh.

In 2012, the company launched its first physical showroom on the ninth floor of a west London office tower, featuring QR codes and miniature 3D-printed models of furniture. It also now has a showroom in London's Soho.