Steel frames stand out against the white interior of this extended house in Whistler, where Canadian firm Stark Architecture has also updated the existing residence and clad the whole building in black.

Based in Vancouver, Stark Architects overhauled the house for a young family, who wished for an open-plan home that they could entertain in, and showcase their contemporary art collection.

The site's zoning also allowed for a two-bedroom rental unit to be included in the redesign.

"Mitch and Foz are two infectiously happy and chilled people with two young kids," said the firm. "They had purchased this 1970s cabin which had a huge lot, but the building itself needed a lot of TLC."

The original house was clad in shingles and green-painted timber and had an overhanging porch on its first storey, which Stark Architects kept and updated.

The studio retained the deteriorating residence, with its gabled roof and windows, and added an extension with a slanted roof and a glazed outdoor terrace. The entire home was clad in black metal to marry the old and new sections.

"Rather than knock down the building which is so common in Whistler, we set about planning to renovate the existing building and tie it into a new two-storey modern warehouse and industrial extension," the firm said.

Outside and in, the residence has a contemporary feel. The new addition houses a spacious great room, marked by a slanting ceiling supported by industrial steel moment frames.

Upon entering on the ground floor is a double-height foyer with a large black staircase. The entryway is flanked by two walls that are clad in metal to match the exterior.

"Tying the buildings together was tricky, but the use of standing-seam metal and more industrial materials, along with a small amount of warm wood, complements the traditional shapes of the existing cabin," the studio said.

To the left on the ground floor is a bedroom, private bath, and a mudroom that links to a two-car garage. On the other side is a small bathroom and second bedroom.

The rental unit is located on the ground level, in the original portion of the home. It is accessed from a separate entrance and includes a kitchen, living room, two bedrooms, and a bathroom.

The main residence takes up the entire top floor. The angular addition houses a main living area, with a rectangular layout containing a kitchen and its central island, plus a dining room and sitting area on either end.

A hallway leads to an office, bathroom, and two bedrooms – one of which has access to the original covered porch.

For decor, the house is marked by its stark white and black surfaces that serve as a blank slate for the homeowner's contemporary art.

A collection of nine skateboards are on display as wall art in the living room, while a large figurine by American artist Kaws is on display in the foyer. A bathroom is lined in pastel tiles that are covered in graffiti, with other art pieces decorating the rest home.

Whistler is a popular ski resort town, situated two hours north of Vancouver in British Columbia. Other houses in the province include a stilted concrete house by Hunter Office Architecture with a layout influenced by a traditional Hindu organisational system, and a timber artist's cabin on Vancouver Island by Agathom.

Photography is by Krista Jahnke. 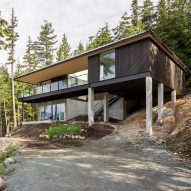