Based in Milan, Oshiro was recently named as one of the Italian Rising Talents at this year's Maison&Objet fair, where he presented pieces designed for brands including Kristalia and Poltrona Frau.

Among these was the new CC01 chair, released this year under Oshiro's eponymous brand. It is intended to be a modern reinterpretation of the classic Chiavarina chair, created by Italian furniture maker Giuseppe Gaetano Descalzi in 1807.

"The goal wasn't to design a new chair from scratch, but to create a piece that can drag a tradition to the present time, something that preserves the original archetype's imprint," said Oshiro.

The designer headed to the small Italian town of Chiavari, Genoa, where Descalzi's chair was originally made. Here, he closely observed the work process of traditional craftsmen still producing the Chiavarina.

Oshiro then made a template of the classic model, reworking it in a series of drawings and eventually 3D models until he settled on a final prototype that he felt "encountered past and present".

Wanting to optimise on comfort, Oshiro broadened the seat of the chair to allow users more freedom to move around, and slightly curved its backrest to more closely follow the natural shape of the body.

Oshiro, who believes the traditional Chiavarina chair was "conceived for a formal and posed way of sitting", went on to lower the armrests of the CC01 to allow sitters a more casual posture.

According to the designer, the chair's lowered armrests also reinforces its structure – meaning it can have fewer reinforcement beams between the legs and therefore an overall more simple silhouette.

The designer has made a "historic" edition of the CC01 which features a cherry wood frame and Indian cane seat, but there are also more contemporary versions available made from black lacquered wood with a leather seat.

The CC01 chair was selected as one of Dezeen’s top 10 launches from Maison&Objet – other chosen designs included Tom Dixon's printed range of textiles and Nendo’s homeware collection for lifestyle brand Zens. 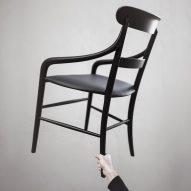