Children's furniture made out of recycled plastic and wooden bookcases featuring discordant shelves are among editorial assistant Natasha Levy's pick of the best products from this month's Maison&Objet furniture fair.

Located in Paris, the January edition of the twice-yearly fair took place earlier this week. Highlights for visitors included pared-back furnishings by Designer of the Year Cecilie Manz, as well as fresh creations from a host of emerging Italian designers.

From the thousands of products and collections presented over the four-day event, Dezeen's Natasha Levy has rounded up the best in show.

Featuring rounded edges and speckled surfaces, the collection is comprised of a table, chair, rhinoceros-shaped lamp and a storage container that's based on the figure of a Kiwi bird.

Named as one of Maison&Objet's rising talents for 2018, Milan-based designer Kensaku Oshiro worked alongside traditional craftsmen in the small Italian town of Chiavari to produce the CC01 chair.

This version of the lightweight chair has a lacquered timber frame and leather seat, but it can also be rendered in cherry or beech wood.

Danish brand 101 Copenhagen revealed its latest range of ceramics, which have been completed in muted hues of black and slate grey.

While simple in silhouette, the pieces reference a variety of imagery including the bulbous form of submarines, the texture of tree bark, and ancient Greek pottery.

The British designer also added to his range of home accessories with a series of cork and terrazzo candle holders.

Crafted to appear as both "stable and light", the Geoffrey mirror features a brass dish to hold keys and a lacquered steel rail where users can hang scarves or umbrellas.

Nendo teamed up with Chinese lifestyle brand Zens to launch a variety of playful home accessories in its signature minimalist aesthetic.

Among them was a display system inspired by the image of birds sitting on a power line, and a stackable tea set with rounded stone-like lids.

French brand Haos revealed a range of cylindrical lights in warm shades of brick red and cognac brown reminiscent of the 70s. Complete with brass detailing, the white editions of the lamp feature a subtly cracked surface.

Led by couple Sophie Gélinet and Cédric Gepner, the brand said the collection is based on "sculptural shapes with refined lines".

Maison & Objet's designer of the year Cecilie Manz presented a new room divider crafted from smooth panels of Oregon pine that are separated by strips of leather.

The piece appeared in Manz's exhibition at the fair, alongside several of her already well-known creations like the Caravaggio lamp.

Comprised of stools, wall decorations, stackable shelves, and a table, the range has been crafted entirely from resin and is intended to be a "study in simplicity".

Made from solid oak, the brand also employed the material to craft a wobbly-edged stool and a simplistic dining table. 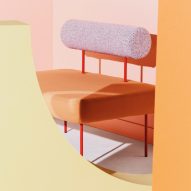