With the news that IKEA founder Ingvar Kamprad has died, here's a look at some of the most important pieces of furniture he commissioned, from the modular Billy bookcase to the affordable Klippan sofa.

Kamprad was just 18 years old when he started IKEA, in 1943. He led the company for 70 years, making it the world's largest and most influential furniture retailer, responsible for bringing contemporary design to the masses.

IKEA's success can be attributed to his drive to reduce cost and outsource effort. The Swedish company became known for its modular, low-cost furniture, which was often sold flat-packed so customers could collect boxes from warehouse-style stores and assemble items themselves.

Kamprad passed away on 27 January 2018, aged 91. IKEA has paid tribute to him as "one of the greatest entrepreneurs of the 20th century".

Here's a look at five of the most pivotal pieces of furniture he launched:

This three-legged, leaf-shaped side table started a revolution in self-assembly furniture.

According to legend, Swedish designer Gillis Lundgren was transporting the table to a photoshoot but was unable to fit it into his car – so he sawed off the legs, to simply reattach later. Kamprad was impressed and hired new designers to develop similar concepts – heralding the dawn of the flat-pack age.

The table was reintroduced to IKEA's collection in 2013, redesigned and renamed Lövebacken. Its tabletop is made from poplar veneer, while its  detachable beech legs feature gold-coloured accents on the feet.

The ultimate modular storage system, Ivar is a pine shelving unit that is available in a variety of shapes and sizes. It can be easily customised, by attaching various cupboards, shelves and drawers, and can be finished in paint or oil.

The product celebrates its 50th anniversary this year.

In the 1970s, Japanese designer Noboru Nakamura came to Sweden to learn more about Scandinavian furniture. Fusing together what he learned with his own design education, he developed a flexible chair with a cantilevered seat, and curved backrest.

The chair originally came with a tubular steel frame. But was this later switched to plywood, and the chair was renamed Poäng. Today, it comes in a variety of upholstery options, and is also available in a rocking chair version.

The Billy bookcase is one of the simplest products in IKEA history, and its versatility is key to its success.

Another design by Gillis Lundgren, the concept was first sketched on a napkin over 40 years ago. Today, more than 60 million of them have been sold worldwide – and IKEA makes 15 more of them every minute.

The design is available in different heights, widths and styles, with adjustable shelves and the option to add glass doors.

This affordable contemporary sofa features a basic, rectilinear shape, with a low-slung back rest. Its simple profile makes its easy to reupholster or slipcover, so it can be easily customised.

It has proved so popular that IKEA recently launched a scaled-down version aimed at pets. 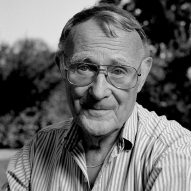