A 130-metre-tall spherical concert hall that could rise taller than St Paul's Cathedral, is being planned near the Olympic park in Stratford, east London.

Dubbed The Golf Ball, early designs for the distinctively shaped 20,000-capacity arena seen by the Guardian, are being prepared for the sports and entertainment firm Madison Square Garden Company (MSG).

MSG has allegedly employed London-based architect Populous, the designer of the nearby Olympic Stadium, to draw up plans for the arena.

The venue would rival London's O2 arena, the city's current largest indoor venue, which was also designed by the stadium and venue specialist. The architect is also currently designing Tottenham Hotspur's new stadium in London and a new arena in Bristol.

MSG currently operates Madison Square Garden and the Radio City Music Hall in New York as well as the Forum in Inglewood, California, however, this would be the company's first venue outside of the USA.

The venue would reportedly stand 130 metres tall, making it 19 metres taller than St Paul's Cathedral, and more than double the height of the nearby stadium.

Early designs show seating arranged in a 360-degree bowl within the globe-shaped venue. The sphere would be supported on a tripod of pylons that would allow pedestrians to pass underneath it.

Reports suggest that the venue is being planned for an empty site alongside the Westfield Stratford City shopping centre.

The site has been earmarked by the London Legacy Development Corporation (LLDC) – the planning authority responsible for the Olympic park area – for "large-scale town centre use with supporting elements". 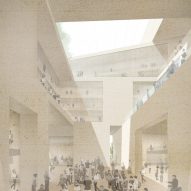 A plan for a snow dome, that was backed by former London mayor Boris Johnson, for the site was abandoned in 2016.

At present it is unknown how likely the building is to be realised as designs have not yet been to be submitted to the LLDC.

Westfield shopping centre was completed in 2011 in advance of the London 2012 Olympic Games. Since the games, the site has been redeveloped, with the Queen Elizabeth Park opening in 2014.

Development in the area surrounding the park is continuing with the so-called Olympicopolis masterplan set to include outposts for the V&A, Sadler's Wells Theatre and University College London (UCL). The design of UCL's proposed Olympic Park campus will be designed by architecture firms Stanton Williams and Lifschutz Davidson Sandilands.