Adam Nathaniel Furman has created a pair of flamboyant cabinets, mimicking the colourful Anime shops of a 1960s shopping centre in Japan.

Featuring bright clashing colours and bold geometric forms, the cartoonish cabinets are named the Nakano Twins after the Nakano Broadway mall in Tokyo.

The four-storey shopping centre is famous in the city for its many shops that sell anime items, video games, manga, and animation character figurines.

The two units are made out of powder-coated steel, sprayed MDF and painted tulipwood. Mounted on castors, they are designed to be multifunctional.

London-based Furman told Dezeen: "The Nakano Twins are a pair of furniture units designed to be as full of personality as cartoon characters – voluble, talkative little members of the household that bring as much animation to the spaces they are in as a happy pet, or a boisterous toddler."

He continued: "The Twins are dressed-up in their favourite costumes, and are naughtily hybrid in their use, following their owners around their office or apartment on their little orange wheels, offering to be drinks stands, bedside tables, office storage, or just a handy colourful, loyal domestic companion."

The second is a six-drawer unit, with a lemon-yellow front, a pink rear panel and blue sides. It features a slender red shelf raised up on white tubular columns.

The drawers of both cabinets contain curved recesses, with upright handles slotted in the centre of each one.

"The units are made in London, inspired by Tokyo, and are totally 100% Kawaii," added Furman, referring to the culture of cuteness in Japan.

Furman is best known an expert on postmodernism, the late 20th-century style that exploits and exaggerates historical references.

He recently released a book titled Revisiting Postmodernism, which he wrote together with architect Terry Farrell. In it, he argues that the movement is currently experiencing a resurgence.

Other projects by Furman include a sequence of four four-metre-high tiled gateways that were installed in Granary Square during the last London Design Festival, and a series of multi-coloured 3D-printed ceramic objects that he made for his Designers in Residence commission at the Design Museum in 2013. 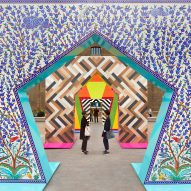 Photography is by Ruth Ward.