New Zealand-based aerospace startup Rocket Lab has faced criticism from astronomers after it secretly launched an artificial star into orbit.

The satellite, which has been likened to a giant disco ball, will be visible from earth for the next nine months, causing several academics to brand it "space graffiti".

Named Humanity Star, the satellite was launched into orbit along with three conventional satellites on board the rocket Still Testing, from the Mahia Peninsula on New Zealand's north island.

With the launch on 21 January 2018, New Zealand became only the 11th country in history to successfully deploy a satellite into orbit.

However, this fact has been outshined by the inclusion of Humanity Star, which can be tracked on the Rocket Lab website.

Made from carbon fibre with 65 reflective panels, the satellite will spin rapidly reflecting the sun's rays to Earth, where it can be seen as a flashing light.

The Humanity Star will become the brightest object in the night sky for nine months before it re-enters the Earth's atmosphere and decomposes.

Introducing The Humanity Star - a bright, blinking satellite now orbiting Earth, visible to the naked eye in the night sky. Launched on #StillTesting, The Humanity Star is designed to encourage everyone to look up and consider our place in the universe. Website coming soon pic.twitter.com/wvIEcXelVk

"Orbiting the Earth every 9o minutes and visible from anywhere on the globe, the Humanity Star is designed to be a bright symbol and reminder to all on Earth about our fragile place in the universe," said Rocket Lab CEO, Peter Beck.

"My hope is that everyone looking up at the Humanity Star will look past it to the expanse of the universe, feel a connection to our place in it and think a little differently about their lives, actions and what is important," he continued.

Despite Beck claiming it an "almost precedented" step in commercial space exploration, the privately owned satellite has received ample criticism from astronomers.

The major concern for scientists is that the satellite's brightness will interfere with measuring the light registered from real stars.

In an article for Scientific American, the director of astrobiology at Columbia University, Caleb Scharf, was among those to voice his concerns. He described the star as "another invasion of my personal universe, another flashing item asking for eyeballs".

Others were quick to disparage the launch on social media, with commenters calling it "space garbage" and "vandalism".

Assistant professor of astronomy at Columbia University, David Kipping, wrote on Twitter: "This is stupid, vandalises the night sky and corrupts our view of the cosmos".

This is stupid, vandalizes the night sky and corrupts our view of the cosmos. https://t.co/KkATT35Kf0

The Humanity Star is amongst 4,500 satellites currently orbiting the Earth.

It is part of a wider trend that sees commercial companies embarking on space-related projects, including Elon Musk's plan to use rockets as a form of transport on earth and Bjarke Ingels' designs for a Mars Science City. 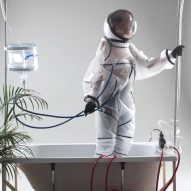