Organisers of property event MIPIM have been attacked for their soft approach, after vowing to "increase communications" with delegates about inappropriate behaviour at the male-dominated trade fair.

The criticism comes in the wake of the Financial Times' exposure of the sexual harassment and assault experienced by female hostesses at a men-only charity dinner hosted by the Presidents Club earlier this month.

Britain's property sector was out in force at the dinner, with a large number of the industry's senior figures attending.

The allegations refocused the spotlight on behaviour at MIPIM – the world's biggest property event, and a key networking event for architects and industry professionals, held each year in Cannes, France.

MIPIM gained the reputation of "not the property industry's finest hour"

Trade publication Estates Gazette described MIPIM as "not the property industry's finest hour", in a story that revealed sex workers using the Twitter hashtag #mipim2016 to attract punters, damaging the reputation of the event and putting women off attending.

ZCD Architects co-founder Dinah Bornat, who attended with business partner Codula Weisser last year, told Dezeen prostitution was not limited to the after parties in clubs, bars and on yachts, but was very much present at the event itself.

Bornat, who was recently appointed a Mayor's Design Advocate, took to Twitter to demand MIPIM and industry bodies take action to "sort this out".

"We were shocked to find not only that it is a very male dominated environment, but that at the official opening party, open only to visitors with MIPIM passes, there were clearly a large group of what we would describe as prostitutes arriving later on in the evening," Bornat told Dezeen.

Yesterday I had this reply from @MIPIMWorld. I'm not sure it’s good enough: our own PM taking better leadership on the issue of sexist and degrading behaviour in industry. I'd like @RIBA @nlalondon etc to issue statement. Let's sort this out. Pls retweet https://t.co/UZIDqto7cK

Bornat's campaign elicited a response, with MIPIM tweeting it would "take action" against any inappropriate behaviour at the event.

However, Bornat said this doesn't go far enough, and called on professional bodies including the Royal Institute of British Architects (RIBA) and New London Architecture (NLA) to take a stronger stance on the need for change in the sector.

In response to the allegations, MIPIM told Dezeen it would be directing delegates more firmly towards its code of conduct, which states its right to refuse entry or expell participants threatening the "image, peace or safety" of the event.

"MIPIM's top priority is to provide a safe and secure environment for all its participants to conduct their business. MIPIM has a code of conduct applicable to everyone attending the event," said MIPIM director Ronan Vaspart in a statement sent to Dezeen.

"We will increase communications to all MIPIM delegates on the code of conduct. If we are informed of inappropriate behavior we will take action. MIPIM is committed to safeguarding the dignity and respect of all its participants."

It said "additional measures" would be communications to delegates, who will pay €1,995 (£1,752) to attend the four-day high-profile networking event.

Industry bodies have been "mute" on sexual discrimination for too long

"MIPIM is heavily promoted by RIBA, NLA, local authorities and other organisations but they have remained mute on the subject," said Bornat.

"Not only is this sexist and degrading but it sends out a clear message that this is how we network in our industry and quite frankly it stinks," she added.

"As Theresa May herself put it: 'This is about attitudes. It's about saying that actually women are not objects just to be used by men. Actually we are equals, we have our own position, our own abilities and that should be respected'."

This year, only 20 per cent of speakers and delegates at MIPIM will be women – up just one per cent from last year.

Sadie Morgan of dRMM Architects,Susan Close of White Arkitekter and Kati Karklund from Microsoft are among the few female speakers.

Just 20 per cent of MIPIM attendees are women

"There is a meeting in London with our (female) MIPIM conference director and Women Talk Real Estate, which was launched last year to promote women speakers at real estate conferences and in the media," MIPIM's head of communications, Mike Williams, told Dezeen.

"This meeting was set up BEFORE the Presidents Club incident as we are committed to increasing the number of women speakers at MIPIM," he said, adding that all of MIPIM's conference organisers are women.

In 2016 women filled just 13 per cent of positions in the UK's construction industry, and in the US 9 per cent, which goes some way to explaining the gender imbalance at the event.

"NLA is doing its bit to speed things up. Our Inspiring Women programme supports and celebrates the role of women across the industry through lectures, debates and mentoring."

Dezeen approached RIBA for comment, but at the time publication the body had not responded. 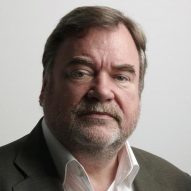 It's difficult to get prominent women to speak, says WAF organiser Paul Finch