Dezeen has teamed up with French illustrator Jean Jullien and his animator brother Nicolas to create this exclusive film, in which Emeco CEO Gregg Buchbinder tells the story behind five of the American furniture brand's chairs.

Jean and Nicolas Jullien, who work collectively as the Jullien Brothers, have illustrated products from across Emeco's 75-year history in the playful style that has marked Jean's rapid rise to prominence as an illustrator in recent years.

The film starts with the iconic Navy Chair that launched the company in 1944 and ends with the 1 Inch chair by Jasper Morrison, which Emeco launched in Milan last year.

Dezeen brought the duo and the furniture brand together almost a year ago, when Emeco asked us to suggest innovative ways to tell the brand's story.

Since then, Dezeen has been working with the Pennsylvania-based brand and the London-based artists to produce the six-minute movie, which features Jullien's trademark style of wry, amusing illustrations in pencil, brush pen and watercolour.

Created by Emeco founder Wilton Carlyle Dinges, the Navy Chair was originally designed for use on US Navy ships and submarines during World War II.

The Jullien Brothers created animated pencil drawings to illustrate the key qualities of the Navy Chair, a playful sequence that ends with two sailors using the chairs to hit each other over the head.

"The Navy had some stringent requirements," Buchbinder explains in the film. "The chair had to be lightweight, fireproof, able to withstand the salt air and, most importantly, durable and hold up against the big burly sailors."

Made by hand from 80 per cent recycled aluminium at Emeco's factory in Hannover, Pennsylvania, each Navy Chair is the result of a complex 77-step process, which transforms the soft raw material into a sturdy chair.

Making such a long-lasting product proved problematic for the company, which saw orders tail off significantly in the 1990s when the Cold War came to an end.

"The ships and submarines were used for scrap metal, but they saved these chairs because they were made so well," Buchbinder says in the film, as the Jullien Brothers' visuals show a man emerging triumphantly from a scribble of scrap metal holding a Navy Chair aloft.

Despite the declining orders, Buchbinder purchased the company in 1998. While the US Navy had stopped buying the chairs, he noticed that a host of leading designers were specifying them, illustrated in the film with a brush-pen drawing of Buchbinder reading through a seemingly infinite list of names.

One such designer was Philippe Starck, who placed a large order of chairs for the Paramount Hotel he designed for hotelier Ian Schrager in New York.

"What I realised at that time was that the chair really had a future beyond the US Government," Buchbinder says.

"I purchased the company and went off to New York to start selling chairs. Today you will find the chair everywhere – in restaurants, in hotels, in schools, in people's homes. It's a part of American history."

Under Buchbinder's leadership, Emeco developed new products, as well as a range of new recycled materials to make them with.

In 2010, it launched the 111 Navy Chair, a plastic version of the classic design made from 111 recycled PET bottles.

The project was initially a collaboration with Coca-Cola, which the Jullien Brothers have conveyed in the film by creating a whimsical Coke bottle-shaped character wearing a suit and tie.

"Emeco has used recycled materials from the very beginning," Buchbinder explains. "Recognising this, Coca Cola approached us with a challenge – how to turn waste plastic bottles into a structurally sound chair."

Emeco spent years developing a recycled plastic material that was strong enough. The resulting 111 Navy Chair is made from 65 per cent recycled PET, reinforced with 35 per cent glass fibre.

"Every year over 10 million bottles are kept out of the landfill," Buchbinder claims.

"But more importantly, we've inspired so many other companies to follow suit and use this material."

Emeco continued to research and develop new materials. Two years after the launch of the 111 Navy Chair, it launched Broom, a chair by Philippe Starck designed to be made from a mixture of waste plastic and wood.

The Jullien Brothers created a portrait of Starck sweeping up with a broom for this section of the film to explain the name of the chair.

"Philippe Starck called the chair Broom because it was the result of sweeping up factory waste and making it into a chair," Buchbinder explains, "75 per cent of it is reclaimed polypropylene, 15 per cent is reclaimed wood from lumber."

"Philippe Starck said it was a chair made from nothing because we didn't use any virgin resources – it was all made from waste materials." 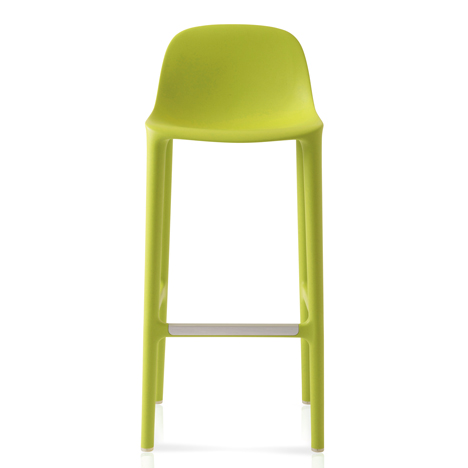 Buchbinder says that his drive for Emeco to develop new environmentally friendly materials comes from his love of surfing, which the Jullien Brothers depict with an illustration of a young Buchbinder waiting to catch a wave as dolphins leap above the surface of the sea.

"I would surf before school, after school and sometimes during school," he recalls. "When you’re in the water, it heightens your awareness of the environment. That's why I'm so passionate about taking care of it."

In 2014, Emeco launched a range of stools called Su by Japanese studio Nendo, which is available in a range of environmentally friendly materials.

The seat of the stool, which is based on the shape of the seat on the original Navy Chair, can be ordered in eco concrete, cork, recycled plastic, or reclaimed barn wood, which is sourced locally from Amish woodworkers near where the Emeco factory is based.

In the film, the Jullien Brothers depict a woodworked carving a stool out of a large piece of wood.

"Oki Sato of Nendo designed more than just a stool, he gave us a platform to explore some of our latest environmental materials," says Buchbinder. 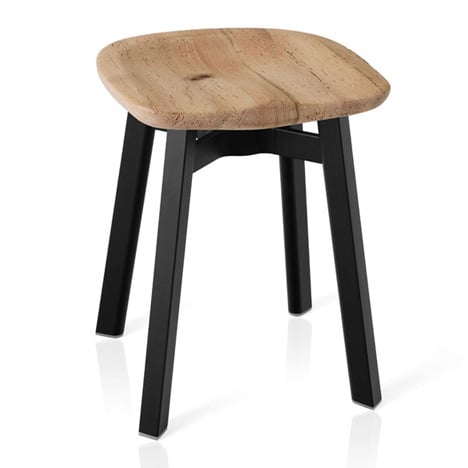 "Sato visited us in our R&D lab in Baltimore. We showed him all of the environmental materials that we had been experimenting with and asked him: 'Which one would you like to use?' And he said: 'why don’t we use them all?'"

The final chair featured in the film is the 1 Inch chair by British designer Jasper Morrison, which Emeco unveiled last year.

The chair is so-called because the profile of the square aluminium tube used to make it is just one inch wide.

Developing the chair was a time-consuming back-and-forth process, which the Jullien Brothers convey with an animation of Buchbinder playing a game of table tennis with Morrison.

"This chair would have been easy with a round tube, but it was important to Jasper, and to us, to capture the look of Emeco," Buchbinder says.

"Jasper would the design the shape of the frame and then the guys on the shop floor would bend it until the aluminium would fail. And this process went back and forth like a ping pong game until we were able to achieve the shape and comfort Jasper was after."

The aluminium frame of the 1 Inch chair is produced by hand using the same 77-step process as the Navy Chair, but it also features a seat and backrest made from a range of Emeco's new recycled and environmentally friendly materials. As such, it can be seen to embody much of the company's 75-year history.

The film ends with three Emeco chairs coming together to form a recycling sign.

"The 1 Inch chair combined all of the things that we are known for: our craftsmanship, our recycled aluminium, along with all the new recycled materials we are using," says Buchbinder.

"At Emeco, I feel it is our responsibility to use recycled materials in everything we make. Hopefully we’ve inspired others to do the same."

This film was produced by Dezeen for Emeco. Illustration, animation and music are by the Jullien Brothers. 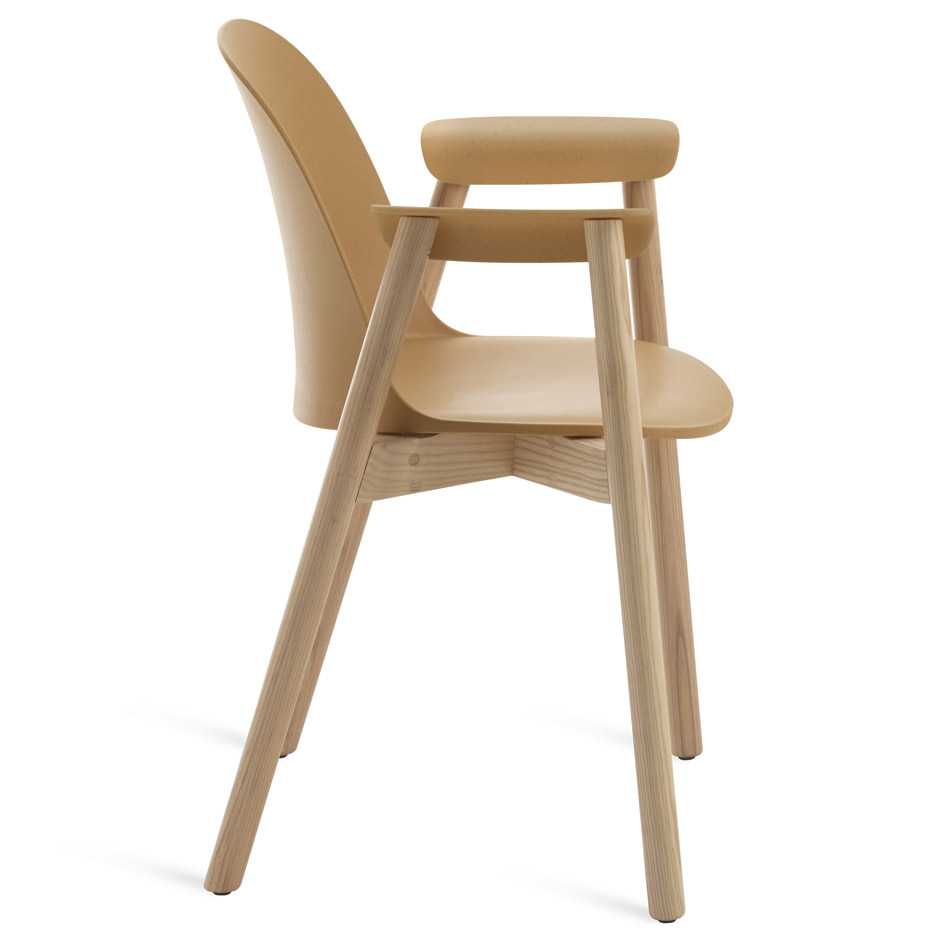