The rental apartment is operated by local firm, Yays Concierged Boutique Apartments, which oversaw the crane's refurbishment in collaboration with the local municipality, and an organisation dedicate to the conservation of historic buildings and sites.

The crane is located in the Eastern Docklands area of the Dutch city, which was heavily bombed during the second world war. Following the war, the Royal Dutch Steamboat Company (KNSM) commissioned the construction of several new cranes, including Figee crane 2868.

The crane was named for the Figee brothers – owners of the Haarlemsche Machinefabriek that constructed it. It was completed in 1957 and operated until 1979, when container transport took over and the IJ river subsequently became too small and the cranes too fragile.

As part of the area's transformation into a residential neighbourhood, which began in 1975, Figee crane 2868 was retained on its site on KNSM-Island as a reminder of the area's industrial heritage.

The structure was relocated to the Frisian village of Franeker in 2016 for renovation, before returning to the former port, which is now a thriving creative hub with many popular art galleries, restaurants and independent boutiques.

The process of repurposing the crane for use as a holiday retreat was overseen by local designer, Edward van Vliet, whose studio previously developed a furniture collection for Moroso that is upholstered in a patchwork of different fabrics.

The design seeks to pay tribute to Amsterdam's industrial history, while providing guests with a premium experience focused on maximising views and a connection with the surrounding area.

"Thanks to the original location and unique neighbourhood, guests will still feel the crane's history and enjoy ultimate comfort at the same time," said a statement released by Yays.

The apartment has a total floor area of 40 square metres, distributed between three repurposed containers that are stacked within the crane's skeletal framework.

Stairs lead up from the harbourside to an entrance that opens into a seating area on the lowest level. A metal-clad staircase incorporating built-in storage separates this space from a compact kitchen and dining area.

The first floor provides space for a bedroom and a bathroom with a freestanding bathtub and separate shower.

The top container accommodates another bedroom, in which one wall has been removed and replaced with a glazed structure that protrudes outwards to allow a panoramic view of the surroundings.

Throughout the interior, Van Vliet used material, fittings and details that recall the structure's past. Exposed steel beams, Critall-style windows and wide wooden floorboards all contribute to a contemporary industrial aesthetic.

"The crane is back in its home port after a thorough restoration and redecoration," added Yays CEO, Peter Heule.

"We're pleased to have the honour to manage the former Figee crane 2868 and to offer it a new life. This is the how we would like to contribute to the development of the city of Amsterdam." 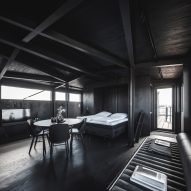