Snøhetta has created a collection of hinged wooden lamps, which were originally designed for a treetop cabin at the Treehotel in Sweden.

Unveiled at this year's Stockholm Design Week, the Flik Flak collection comprises a wall-mounted lamp, a table lamp and a floor lamp.

It marks the first time Snøhetta – primarily an architecture practice – has designed a range of lighting, and it is being launched by Swedish brand Ateljé Lyktan.

The studio originally created the lamps as a series of prototypes for The 7th Room – one of several treetop hotel rooms that make up the Treehotel. It features charred-timber cladding and a suspended net for observing the Northern Lights.

Keen to reflect the building's exterior, the Flik Flak lamps are made from an LED strip sandwiched between two pieces of black-coloured birch veneer.

The planks are held together by a piano hinge, which allows the lamps to be opened and closed at a 180-degree angle.

When closed, the light is focused on one area, and when opened – it disperses across the space.

"The lamps are inspired by the Snøhetta's design for the 7th Room at the Treehotel in Herads," designers Jenny Osuldsen and Stian Ekkernes Ross told Dezeen. "This is an area characterised by long winter months and lights summer days, and we wanted to design a lamp that would be flexible and could adapt to this Northern context."

"For this lamp, we have stayed true to the 7th Room aesthetic by using birch veneer. The dark exterior of the lamps and the light interior reflects the indoor and outside of the 7th Room."

All three lamps will launch at the Stockholm Furniture and Light Fair tomorrow, 6 February 2018, and will be exhibited until it closes on 10 February.

The fair takes place as part of the wider Stockholm Design Week, which sees events, exhibitions and open studios take place across the Scandinavian city.

Elsewhere, Swedish studio Form Us With Love is asking Stockholm Design Week visitors to provide their feedback on a series of prototype designs, which will be installed inside a co-working space in the city.

Snøhetta is based in both Oslo and New York, and is led by architects Craig Dykers and Kjetil Trædal Thorsen. In recent years, the firm has completed many high-profile projects, including a major extension to the Mario Botta-designed San Francisco Museum of Modern Art (SFMoMA) and a redesign of New York's Times Square. The practice has also designed a controversial proposal to overhaul Philip Johnson's postmodern AT&T Building. 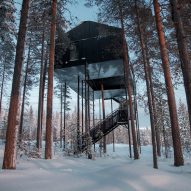