Dezeen is looking a little different today. We have temporarily updated our masthead with a hand-drawn version of the Dezeen logo by Jean Jullien to celebrate the launch of our new film about Emeco, which features illustrations by the French graphic designer.

Despite many updates to Dezeen over the years – including the revamp of the site in 2016 – this is the first time we have altered the logo that appears at the top of Dezeen since Swiss designer and typographer Micha Weidmann created the original logo in 2007.

Jullien's version of the logo recreates Weidmann's lopsided design in his trademark hand-drawn style, which the London-based illustrator created for the closing sequence of our of our recent animated film for Emeco.

In the film – which you can watch above – Emeco CEO Gregg Buchinder tells the story behind five of the American furniture brand's chairs.

Dezeen teamed up with Jullien and his animator brother Nicolas – who work collectively as the Jullien Brothers – to create the six-minute animated movie, which features Jullien's trademark style of wry, amusing illustrations in pencil, brush pen and watercolour.

The film explores products from across Emeco's 75-year history, starting with the iconic Navy Chair that launched the company in 1944 and ending with the 1 Inch chair by Jasper Morrison, which Emeco launched in Milan last year. 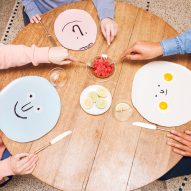