American artist Larry Bell has created a series of huge boxes using translucent and coloured glass, which are designed to evoke the morning fog that rolls in from the coast of California.

Venice Fog: Recent Investigations is an installation involving a series of cube-like sculptures made from semi-transparent and soft-hued glass. Each sculpture comprises a larger enclosure formed by four laminated panels, without a top or base, with a smaller box positioned inside.

The visual effect of the layers is intended to mimic conditions created by the weather and light in the coastal Los Angeles neighbourhood of Venice, where Bell has worked for over 50 years.

"The colour combinations [are] inspired by the marine fog which rolls into Venice, California, the location of Bell's studio since the early 1960s," said a statement from Hauser & Wirth, the international art gallery that is hosting the exhibit in Zurich until 3 March 2018.

Morning fog is typical along the California seaboard, where the cool ocean breeze meets warmer air on land and the moisture condenses to form low clouds.

"The large cubic glass works showcase Bell's interpretation of the luminosity created by the dispersion of water in the fog intermingling with the lights of Los Angeles' desert plain," Hauser & Wirth's statement said.

The glass panels used all measure six feet (1.8 metres) tall. Those that make up the external partitions are tinted in a tone called True Sea Salt, while the smaller internal boxes are in colours named Blush, Hibiscus, Optimum White and True Fog.

This treatment of glass, light and shadow is characteristic of Bell's work. The pieces in Zurich are based on a commission from 1992 for the Museum Abteiberg in Mönchengladbach, Germany, which included two transparent glass cubes of similar proportions made from pink- and azure-coloured glass. The sculpture sits in a park in the city, on top of a shallow reflection pool.

Bell has created glass boxes since he was in art school, when he first inserted scrap glass inside wooden shadowboxes that he found while working a part-time job at a picture frame store.

The artist uses a high-vacuum coating process, which deposits a thin metal film onto the glass panels. This technique allows for him to play visual and physical fields of perception through light.

The large glazed designs appear ethereal and sturdy at the same time, while the layering of translucent and bold hues constantly change.

"Although we tend to think of glass as a window, it is a solid liquid that has at once three distinctive qualities: it reflects light, it absorbs light, and it transmits light all at the same time," Bell said.

Also part of the Venice Fog installation are a set of four much smaller volumes, around 30 centimetres high and 40 centimetres wide, also with smaller boxes inside. Colour combinations include lapis and black, French blue and True Blizzard glass, and zinc with Cornflower Blue.

Bell rose to prominence on the Los Angeles art scene in the 1960s, joining artists like David Hockney and Dennis Hopper. His art is held in collections at the Whitney, Tate, Stedelijk Museum, the Museum of Modern Art, Solomon R Guggenheim Museum, and Los Angeles County Museum of Art. 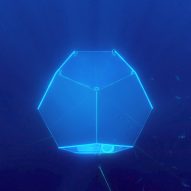 Photography is by Larry Bell, courtesy of the artist and Hauser & Wirth.