Stadium specialist Populous is planning to build spherical music and entertainment venues for the Madison Square Garden Company, in Las Vegas and London.

The company behind New York’s Madison Square Garden (MSG) has released plans to create large-scale venues on both sides of the Atlantic.

Both designed by Populous, the distinctive venues will be branded MSG Spheres. According to MSG the arenas will "feature an iconic design, and will be equipped with game-changing technologies that push the limits of connectivity, acoustics, video, and content distribution".

MSG has released visuals of the first Sphere, planned for Las Vegas, which will have a capacity of 23,000, with 18,000 seats and a further 5,000 standing spaces.

Named the MSG Sphere London, the venue will be based on the same concept as the arena in Las Vegas.

Still in the "early stages" of design, the arena is planned to be built on a site, recently purchased by MSG, near the Olympic Park in Stratford. Further details, including the seating capacity, will be announced by the architect later this year.

The venue would be the first international arena for MSG. London was selected following research carried out by consultancy Sound Diplomacy, which found the city has less large capacity arenas, relative to its population, than other major cities.

"London is one of the world's greatest cities, and we are delighted to be taking this first step towards making it the location for MSG’s first international venue," said Dolan.

The MSG Sphere London will be the latest venue by Populous in the UK capital.

The architects designed the nearby Olympic Stadium, recently completed a stand at Lord's cricket ground, and has designed the new stadium for Tottenham Hotspur Football Club.

Meanwhile, in the USA, the company is designing a football stadium in Miami for David Beckham. 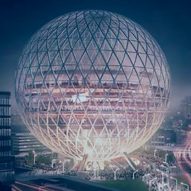