Zaha Hadid Architects has proposed creating a network of pedestrian routes across London to reintroduce walking as a viable form of transport in the city.

The research initiative named Walkable London suggests building on the plans to make Oxford Street a car-free zone, creating a pedestrian network that would become "an integral part of the city's transport infrastructure."

The proposal by the British studio envisions connecting and extending the capital's existing and planned pedestrianised zones to create routes that allow people to walk right across the city.

"London was traditionally a walking city. Walkable London presents proposals that re-introduce walking as an integral part of the city’s transport network," said Zaha Hadid Architects in its proposal.

"To make walking part of a daily routine, we might need a full pedestrian network, which would contribute to the means of transport in the city," it continues.

"Pedestrianising just one street in central London, however popular, will hardly solve multiple London's problems, such as air pollution and road safety."

The studio believes creating a coherent network of routes in the city will encourage people to walk, as an alternative to other means of transport.

The multi-stage proposal would first see the creation of "fully pedestrianised primary boulevards", including Oxford Street, which would then be supported by the creation of secondary car-free routes.

The proposal is exhibited by New London Architecture at London's Building Centre until 26 February 2018.

Oxford Street is set to become a pedestrian-priority area by the end of 2018, and there have been calls for a shared vehicle and pedestrian space at Exhibition Road to become pedestrianised following an accident in 2017.

In London Zaha Hadid was recently one of 39 entrants longlisted to redesign Old Street Roundabout, and is building two soaring skyscrapers at Vauxhall Cross. 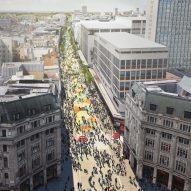