Children with type-1 diabetes can administer insulin in a way that is both easy and fun, using this toolkit created by Mexican designer Renata Souza Luque.

Presented during the Design Indaba conference in Cape Town this week, Thomy is an easy-to-carry kit containing a child-friendly insulin pen and a set of temporary tattoos, designed to make life easier for young people suffering with the medical condition.

Souza Luque, a product-design graduate of Parsons School of Design in New York, starting developing the project after her seven-year-old cousin Tomas was diagnosed.

Like around 80,000 children each year, he found himself in a situation where he had to inject himself with insulin as often as five times a days, to prevent the level of blood sugar in his body increasing to dangerous levels.

"From one day to another, Thomas has to deal with his fear of needles," explained Souza Luque.

"I realised how much this was stealing from Thomas' childhood," she said. "That's when I decided I wanted to design something for children with type-1 diabetes, something fun, something they could look forward to."

Her aim with the Thomy kit was to create something her cousin would be proud to carry around in his backpack.

The two products inside are both designed to make the process of injecting insulin safe and easy. They respond to a series of three issues that Souza Luque uncovered during her research. The first is that the site of injection must be rotated, to prevent lumps of fat developing.

"When injecting insulin, it is crucial to rotate the injection site," she said. "But it's very hard to remember where you have already done so."

As an alternative to the hard-to-use paper templates that are usually issued to diabetes sufferers, Souza Luque designed a set of temporary tattoos featuring playful designs, from outer-space imagery to underwater scenes.

These tattoos create a map of injection spots, identified as coloured dots. Users use an alcohol pad to remove a single coloured dot – ensuring that the area is disinfected – then administer the injection.

"After roughly thee days the tattoo will have no more colour, indicating that it is time to remove the tattoo, choose a new design and move on to a new injection site," said Souza Luque.

The second product in the kit aims to solve the two other issues the designer identified: that the pens typically used for injection are not suited to a child's hand, and that they don't make it easy to administer a full dose.

"Children have a hard time reaching the release on the top, and they don't have the coordination nor the dexterity to hold it in place," she said.

Her design is a pen with a short, easy-to-hold body, which is compatible with standard insulin cartridges and pen needles. It also has a unique feature – a release valve that is wrapped in thermocromic plastic, meaning it changes colour when it comes into contact with skin.

"It motivates the patient to keep the needle in their body longer, ensuring that the full dose is administered, not only this, it distracts the kid when the needle is in their body," said Souza Luque.

To test the success of the project, the designer sent her cousin the product without any instruction manual, and asked her family to send her photos of the results. One of the images she received showed one of Thomas' brothers – who doesn't have diabetes – wearing the tattoos.

"I knew then that I had hit my goal. I had made things better for Thomas," she said.

Souza Luque completed the project in 2017, as part of her studies at Parsons. It was a national finalist in the US edition of the James Dyson Award 2017.

She presented it on the second day of the Design Indaba conference, taking place from 21 to 23 February 2018. Dezeen is media partner for the event. 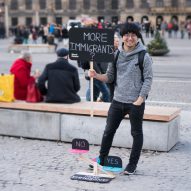