VDF teams up with reSITE today, with the Prague conference sharing five lectures from its 2019 conference starting with Design Indaba founder Ravi Naidoo's talk about the South African design platform he founded in 1995.

The five talks, which will be exclusively shared on VDF, are all from reSITE's REGENERATE conference that took place at the Ricardo Bofill-designed Forum Karlin in Prague in September 2019.

In the first lecture, Ravi Naidoo tells the story behind the Design Indaba conference and discusses the importance of design.

"The fundamental question is this: what's design?" said Naidoo. "Is design a handmaiden to consumption? Is design just to sell more widgets? Or is design in service of people? What's design for?"

Naidoo launched the annual design event in 1995, a year after the country held its first free elections. Since then it has strived to help South Africa make the most of its human capital through design.

"We were so infused with hope that I gave up my day job," he said. "I was an academic at med school, and I just went in and did the leap of faith into trying to reinvent myself as the country was reinventing itself."

"Design has enough power to give dignity"

Describing Design Indaba as a think tank and a do tank, Naidoo said the aim of the project is to be a crucible for change.

"We have to be advocates, but we also have to be exemplars for what it is that we are suggesting to be a great toolkit for the 21st century," he said. "So we get back to the simple honesty of making and we love making."

Design Indaba works in one of the most unequal societies in the world and as a result, it has conceived a number of projects that focus on improving conditions locally.

"What we're wanting to do with design is to give it a higher purpose," Naidoo said.

"A more noble purpose for design, not just to be about consumption. But design, could it improve the quality of life and how could it do it, not just for the haves, but also for the have nots," he continued.

"So, put higher-level questions to design: can design give dignity? Design has enough power to give dignity." 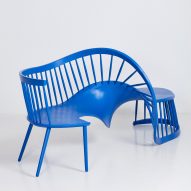 Design Indaba explores the idea of beauty through 10 objects

Among these initiatives is the 10 x 10 low-cost housing project, which teamed 10 global architects with 10 local architects. The resulting designs included Luyanda Mpahlwa's now-complete proposal that made use of sandbags to keep construction costs low.

Design Indaba also helped lay the ground for British architect Thomas Heatherwick's design for the Zeitz MOCAA contemporary art museum in Cape Town, by introducing him to the defunct grain silo that would eventually house the museum.

"We can conceive of a better world through creativity"

In 2018, the conference commissioned Norwegian studio Snøhetta to design Arch for Arch, a tribute to human-rights activist and anti-apartheid campaigned Archbishop Desmond Tutu.

For Naidoo the arch, which is located close to Cape Town's parliament building and its cathedral, is an example of how design can convey a message.

"What does Archbishop Tutu say to this generation, and the generations after, and what the message really is?" Naidoo said.

Naidoo explained that Design Indaba has one simple mission. "Ideas are just the most amazing powerful force," he said. "Creativity is the ultimate renewable energy. We can conceive of a better world through creativity."