The trunk of a Brazilian firetree pierces the white zinc-coated roof of this house by Aaksen Responsible Aarchitecture in Bandung, Indonesia.

Set at the end of a narrow alleyway in a densely built urban area, the local architecture studio built the compact two-storey residence for a Muslim family of four on the western part of the island of Java.

Sunlight was a key component in the design of the building, named Nor House. Openings cut into the sides of the building and its gabled roof allow daylight to filter in from multiple angles.

The triangular window with a white decal cut into one corner of the building's mass allows daylight to flood the home's prayer room, projecting a shadow of the word Allah onto the floor.

The zinc-coated corrugated metal walls and roof reflect the sun's rays and make the structure stand out from the jumble of surrounding buildings.

"The name of Nor House itself is taken from their [the client's] children, who have the word nur or light in Arabic as part of their name. The name inspired us to put the element of the sun into the design," explained lead architect Yanuar Pratama Firdaus.

"In Islam, the communication between humans and God is called the five times of obligatory ritual prayer, in which the five times indicate the transition of the sun," he added.

"The prayer ritual was also our inspiration to design a house with the sun and light as the narrative of the architecture."

A Brazilian firetree planted in the covered garden grows up and out of a square hatch cut into the sloping roof, and a spotlight at the base illuminates the trunk at night.

Trees that burst through the facade are a popular feature in contemporary Indonesian architecture. Branches protrude through circular openings cut into the decks of Budi Pradono's "anti-establishment" house in Jakarta, and trees emerge through openings in the grass-covered roof of another of the studio's projects in the city of Depok.

A wide, angled doorway to the garden opens up the facade of the building, allowing air to circulate to the prayer room off to one side. Sliding glass doors connect the tiled porch to the main part of the house.

The covered, double-height walled "dry garden" provides a semi-outdoors place that is shaded during the hot dry season and sheltered during the rains of the wet season.

In an architectural style described by Aaksen Responsible Aarchitecture as "contemporary tropical", Nor House offers a total of 105 square metres of living space split over two floors. White-painted walls and light parquet floors or ivory-coloured porcelain tiles were used throughout.

Along with the prayer room and patio, the ground floor includes an open-plan living room, dining room, and kitchen, with a separate pantry and drying room, and a downstairs toilet.

Upstairs two children's bedrooms and a family bathroom are arranged either side of a hallway, which overlooks the garden below on one side. The master bedroom runs the full width of the second floor at the end of the gallery.

Another Budi Pradono project, this time in Lombok in Bali, features a shipping container tilted at a 45 degree angle to create a sloping roof for the master bedroom for a house set into a hillside. 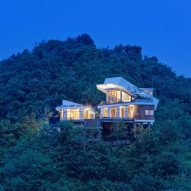