Lego is set to launch a range of botanical elements made from a plant-based plastic sourced from sugar cane, in a bid to reduce its plastic waste.

The soft, durable and flexible polyethylene plastic, made using ethanol produced from sugar cane, is being used to produce the brand's leaf, bush and tree-shaped elements.

While the plant-shaped pieces only account for small percentage of Lego's output, the company's ultimate goal is to produce all of its bricks using the bioplastic by 2030. Its first set of sugar cane elements will appear on shelves later this year.

"At the Lego Group we want to make a positive impact on the world around us, and are working hard to make great play products for children using sustainable materials," said Tim Brooks, Lego's vice president of environmental responsibility.

"We are proud that the first Lego elements made from sustainably sourced plastic are in production and will be in Lego boxes this year. This is a great first step in our ambitious commitment to making all Lego bricks using sustainable materials."

As good as conventional plastic

"Lego products have always been about providing high-quality play experiences giving every child the chance to shape their own world through inventive play," said Brooks.

"Children and parents will not notice any difference in the quality or appearance of the new elements because plant-based polyethylene has the same properties as conventional polyethylene."

The introduction of plant-based plastics comes as part of the Lego's wider commitment to use sustainable materials in core products and packaging by 2030.

In 2013, the company partnered with World Wildlife Fund (WWF) to support and build demand for sustainably sourced plastic, and in 2016, the group joined the Bioplastic Feedstock Alliance (BFA) to secure fully sustainable sourcing of raw material for the bioplastics industry.

"It is essential that companies in each industry find ways to responsibly source their product materials and help ensure a future where people, nature, and the economy thrive," said Alix Grabowski, a senior program officer at WWF.

"The Lego Group's decision to pursue sustainably sourced bio-based plastics represents an incredible opportunity to reduce dependence on finite resources, and their work with the Bioplastic Feedstock Alliance will allow them to connect with other companies to continue to think creatively about sustainability."

Plastic waste under the spotlight

Other steps taken by Lego to reduce its CO2 emissions include an investment in wind power, to ensure that energy used to make its bricks is balanced by the production of renewable energy.

It has also introduced sustainable paper pulp trays for its advent calendar, with the aim of reducing plastic waste from going to landfill.

The use of plastic packaging by global companies has come under scrutiny recently with a host of corporate giants including Coca-Cola, Ecover, Evian, Amcor, Marks and Spencer, Wener & Mertz, L'Oréal, Mars, Walmart, PepsiCo and Unilever making commitments on their approach to packaging.

Announced at this year's World Economic Forum in Davos, the companies are being supported by the Ellen MacArthur Foundation – a UK-registered charity that aims to accelerate a transition to the circular economy.

Earlier this week, British tea brand PG Tips announced it is launching a new tea bag made from 100 per cent biodegradable plant-based materials, replacing its old design that included a proportion of polypropylene plastic. 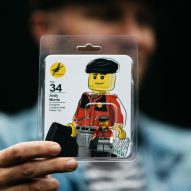